Joseph Hall, son of Ernest and Annie Hall of Killymoon Street, Cookstown and husband of Pat, enlisted into the Royal Inniskilling Fusiliers at Omagh, Co. Tyrone in May 1941.

He volunteered for airborne forces from the Royal Irish Fusiliers in 1943 and served with 1st (Airborne) Battalion The Royal Ulster Rifles. ‘Joe’ Hall went landed in Normandy by glider on the evening of 6 June 1944 at LZ N, near Ranville, and was initially deployed to extend the southern sector of the bridgehead. In Normandy he lost one of his best friends L/Cpl Henry Greer.

He went on to fight with 1st (Airborne) Bn, RUR in the Ardennes and The Rhine Crossing (Operation Varsity). After the Second World War he served in Palestine Sergeant Hall demobbed from the Royal Irish Fusiliers in March 1948.

After a short spell in ‘Civvy Street’ he re-enlisted in 1948 into the Royal Army Ordnance Corps and served in Egypt before demob in 1952.

Joe and Pat had two daughters, Daphne and Phyllis. J

Joe Hall worked as a contracts manager at Briggs Amasco, a roofing contractors in Antrim, Northern Ireland. When he died aged 56, in April 1980 the company closed on the day of his funeral as a sign of respect to 'a one of it's best known and most respected workers' 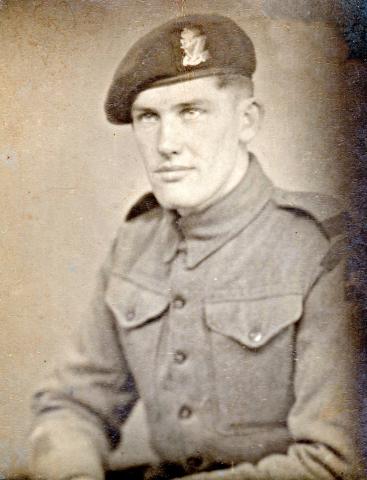