Joseph Eaton Roberts, Son of Samuel and Margaret Roberts, of Llandudno Junction, Caernarvonshire enlisted into Royal Welch Fusiliers and upon completion of his training was posted to the 10th Battalion.

In August 1942 this unit was chosen to become the 6th (Royal Welch) Parachute Battalion (6th Para Bn) and Private Roberts was one of those who volunteered to remain with the battalion and help form the new unit.

He attended parachute course 25, at RAF Ringway, from 31 August to 8 September 1942 and he sailed to North Africa in May 1943, with 7 Platoon, A Company 6th Para Bn. The Battalion was not used in North Africa but went on to see active service in Italy.

Pte Roberts jumped into Southern France on Operation Dragoon in August 1944 and went on Operation Manna in Greece.

He 'Died of Wounds' on 8 December 1944, aged 22 years old and is now buried in Phaleron War Cemetery, Greece. 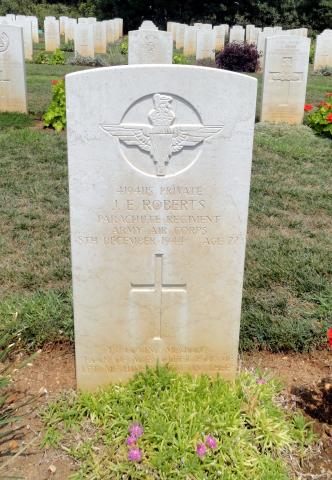