Joseph Duncan enlisted into the General Service Corps and volunteered for airborne forces in 1945.

Private Duncan undertook parachute training course B167 from 10 to 24 June 1945 at RAF Ringway. The course report states: ‘Av. Jumped V. well. Cheerful and confident.’ Pte Duncan went to the Holding Battalion and was later posted to the 2nd Parachute Battalion.

He died aged 21 years in Palestine on 26 October 1947 after being injured in an accident the day before in which the lorry he was travelling in collided with another military vehicle, killing fourteen military personnel.

NB Four other members of course B167 were killed in the same accident as Pte Duncan. 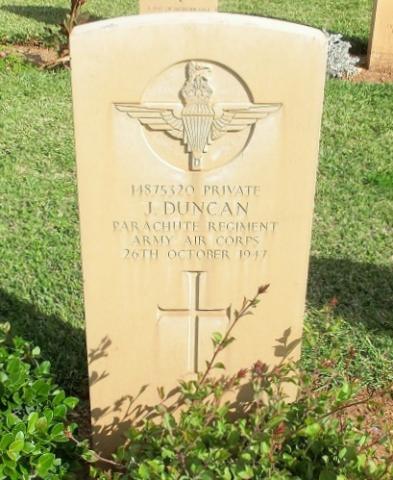