Joseph Counter from Cheadle, Cheshire worked as a Handy Boy at a paint and wallpaper store before enlisting into The Cameronians (Scottish Rifles) on 26 July 1938. Like many others ‘Joe‘ lied about his age saying he was 18 when he was actually 17.

He served in France and was evacuated from Dunkirk.

Private Counter volunteered for airborne forces and qualified as a military parachutist on course 21/22 at RAF Ringway in August 1942 and was posted to B Company, the 3rd Parachute Battalion (3 Para Bn).

He went to North Africa on Operation Torch, On 12 November 1942 the 3rd Battalion captured the German airfield at Bone in Tunisia, the first British Army battalion level parachute operation.

Private Counter was taken a Prisoner of War (PoW) on 18 November 1942. He was held at several PoW Camps until liberated in April 1945.

Pte Counter was demobbed in June 1946.

Any words written in red are the notations of Joseph’s son Chris. 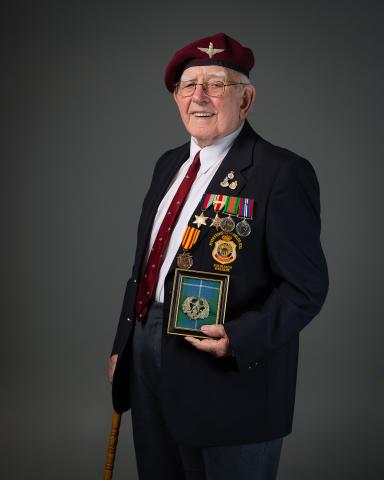