Jose Maria Irala was born in Spain in 1924. He fought against the fascists of General Franco and their German supporters during the Spanish Civil War, along with his brother and father.

After Franco’s victory he left Spain and travelled to England to carry on the fight against the fascists and the Germans. Jose, who became known as ‘Joe’, initially joined the Royal Armoured Corps, when in March 1944 he volunteered for Airborne Forces. He was on parachute course 109, at RAF. Ringway, from 27 March to 7 April 1944. This was part of the first large Recce Squadron group to undertake parachute training in the UK.

Upon completion of the course he was posted to the 1st Airborne Reconnaissance Squadron and was in 10 Section, ‘D’ Troop.

He parachuted onto DZ X, near Heelsum in Holland, on Sunday, 17 September 1944 as part of Operation Market-Garden. He linked up with his section officer, Lieutenant John Marshall and they then made their way to the rendezvous point near the corner of a wood and south of the railway line. Somehow when the squadron moved off they went in the wrong direction in their jeep and headed south towards Renkum. An encounter with an enemy armoured car made them retrace their route, but they then headed towards Arnhem. They managed to link back up with the squadron, back near the landing zone, before the end of the day.

18, 19 and 20 September were taken up with constant attempts to see if they could find a way round the German opposition and blocking positions, until it was realised that it was hopeless.

On Wednesday, 20 September the main body of the squadron was gathered opposite the Hartenstein Hotel, awaiting orders from Divisional HQ, when it was reported that a German self propelled gun was heading their way from the Oosterbeek crossroads. In the scramble to get the jeeps clear 'Joe' Irala was caught by a burst of machine-gun fire.

‘On a signal, there was a simultaneous mounting of the vehicles and the Squadron moved off at speed. As the jeeps revved away, a burst of machine-gun fire from the armoured vehicle suddenly raked across the last one. The jeep had already begun to move, but Trooper 'Joe' Irala, who was in the act of jumping on, was hit. John Marshall remembers that, as they pulled him aboard, he complained about having been shot in the leg, although it was obvious to the others that it was much more serious. “When I saw what had happened to him,” said Marshall, “I drove straight across to the first-aid post at the Hartenstein. We were shot at continuously on the way, but I didn’t pay any attention to it. By the time we’d arrived, ‘Joe’ was unconscious.” In fact, Irala, the boy who had come from Spain to fight for the British, had taken a machine-gun burst full in the stomach, and he died just thirty minutes later. [Note: This is probably a statement meant for the family, as he definitely died at the St Elizabeth’s Hospital two days later and was buried there.] For Marshall personally, it was a particularly tragic episode, for there was a strong bond of friendship between the two men which transcended the difference in rank. “I still remember him today,” said John Marshall, “as a wonderful soldier – highly intelligent, immensely brave, and with a capacity, which the average Englishman doesn’t have, for giving enormous personal loyalty.”’ [1]

He was taken to the Hartenstein RAP (Regimental Aid Post), where he had become unconscious and was then transported to the St Elizabeth’s Hospital in Arnhem, where he died two days later and was buried there. He was just 20 years of age. He now lies at rest in the Arnhem/Oosterbeek War Cemetery, in plot 22 A 5. 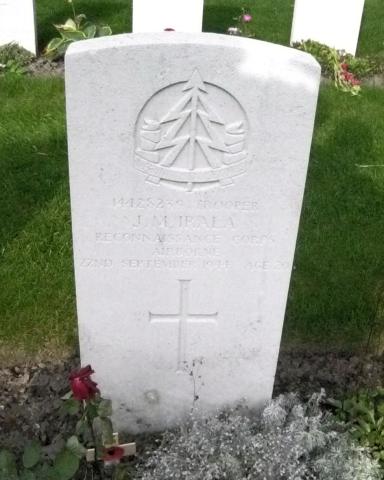