After being called up for National Service aged 18, John Ayres entered RMA Sandhurst alongside a young Chris Bonnington in 1954.  A keen rugby player at centre three-quarter for Warwick School, he went on to play for Sandhurst 1st XV.  Wishing to continue playing rugby (and get paid), he was commissioned into The Welch Regiment (41st foot) at Pembroke Dock in 1955.  He played in the Welch Regiment rugby team that won the Army Cup in 1956, scoring the winning try to beat The Royal Welsh Fusiliers.

In 1960 he joined the 3rd Battalion Parachute Regiment based in Aldershot with whom he served for the next three years, rising to the rank of Captain.

He married his first wife, Anita, in Camberley in June 1961 and was then posted to Bahrain in October 1961 for a 3 month tour of duty in the Gulf.  Based at Muharraq Airfield, with his fellow officers he enjoyed the opportunities for water sports, sightseeing and apparently playing rugby on the baked hard ground when not jumping out of Beverley Heavy Transports.

He was sent to Oman and to Nizwa with B Company then worked on operational patrols in The Jebel Akhdar with The Northern Frontier Regiment of The Royal Oman Army countering the threat of insurgency in the area by setting up ambush patrol positions amongst other duties.  He also spent time in Dubai and Sharja working with The Trucial Oman Scouts before the Battalion beating of retreat on 11th December 1961 and a return to Aldershot.

John left 3 Para in 1963 returning to 1 Welch who were then the demonstration battalion at The School of Infantry in Warminster.  He now had 2 baby sons and wished to avoid any more unaccompanied tours of duty for a few years.

Following the amalgamation of The South Wales Borderers (24th) and The Welch Regiment (41st) into The Royal Regiment of Wales in 1969, John was promoted to Major and was CO of A company during tours to Germany and two stints in Belfast in 1972 and 1974 where he was put forward for the Military Cross but actually awarded a Mention in Dispatches.

He remained in the RRW and after many postings to Cyprus, Wales and BAOR, John retired from the Army aged 57 in 1992.  He worked for the Army Sport Control Board running Army Golf and the Army Winter Sports Association from then until 2000.

He passed away in April 2018 after a very short but terminal illness. 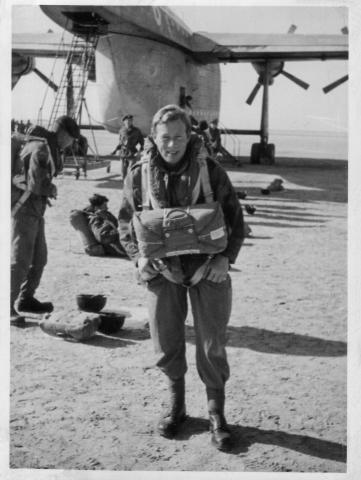