John joined the Coy in November 1973, serving under Maj Hew Pike. Early the following year, he passed 'P' Coy at Aldershot in January 1974, before completing his Parachute training course at RAF Abingdon in February the same year.

During his years with the Company, John took part in various exercises and summer camps to the British Army of the Rhine (BAOR) in Germany.

He was also awarded US Parachute Wings in April 1975, after a course with the 1/509 Airborne in Vizenza, Italy and the following year, gained German Parachute Wings at Vogelsang in 1976 after completing jumps from Huey Helicopters.

16 Coy acted as Recce/Pathfinders for 44 Para Bde and were fiercely proud of their independence. Whilst with the Coy, John served under four Officers Commanding:

"The first, Maj Hew Pike, or 'The Tabmeister', so named as the Coy went everywhere by foot, followed by Maj Tony Clark, who insisted on travel by stripped down light-weight Landrovers. The third, Maj John Insley, was known as the SAS 'Jolly Green Giant' who put fun into professionalism and finally Maj Hamner, who saw the Coy through the difficult transition to a Rifle Coy in 15 PARA (SV)." 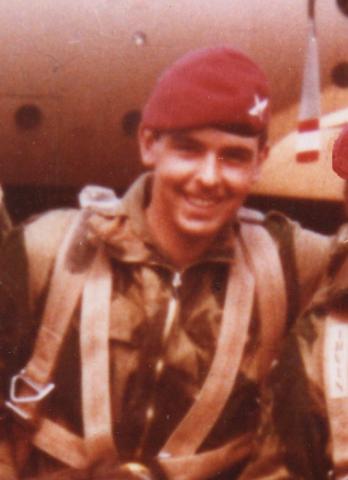