Sapper John Wilfred Walsh was the son of John and Mary Walsh, of Stretford, Lancashire. He served with 9th Field Company (Airborne) Royal Engineers and took part in the ill-fated Op Freshman mission to sabotage the German development of an atomic bomb at the Vermock Heavy Water plant in Norway.

Sapper Walsh was amongst those killed whilst a Prisoner of War on 18 January 1943, aged 21 years old. Their bodies were finally recovered in August 1945 and Sapper Walsh was buried with full military honours at Vestre Gravlund, Western Civil Cemetery in Oslo. 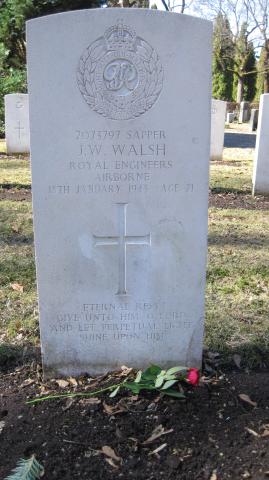 Andrew Walsh said:
Sapper John Wilfred Walsh is my Great Uncle. Born in Salford to John and Mary Walsh he was the second child of four alongside older brother Frank and younger sisters Winifred and Mary. On telling his brother Frank (my Grandad) he had volunteered for Airborne Forces, or this mission in particular (not certain which as the story has been passed down), Frank replied 'what the bloody hell have you gone and done that for?'

Heartbroken by the death of his brother, he named my Dad John in his memory. Rememberance Sunday naturally became a very emotional day in the house, with Frank not ever really knowing properly what happened to his brother, something that is probably for the best with the truth being so horrific. Unfortunately I know very little more about my Great Uncle, just glad websites like this are keeping the memory and sacrifice of him and so many others alive.
Add your comment