John William Riddell was born on March 18, 1923 in Nuneaton, Warwickshire. The son of Albert Henry Riddell and Mary Maria Riddell (Hall), John was the third eldest of seven children. His sister Dorothy recalls him as 'a high spirited lad'. John attended Vicarage Street School and after was employed by Messrs. Taberers, a Nuneaton builder as a bricklayer.

John enlisted into The Royal Warwickshire Regiment around February 1942. In November 1942 his battalion was turned over to airborne forces and redesignated as the 8th (Midlands) Parachute Battalion. It became part of the 3rd Parachute Brigade within the newly formed 6th Airborne Division.

After training at Hardwick Hall, he attended Parachute Training Course 44 which ran at RAF Ringway from 28 December 1942 to 8 January 1943. The course instructor recorded that he showed ‘a great keenness.’

Pte Riddell saw active service in Normandy with 8th (Midland) Para Bn and dropped into Germany on Operation Varsity (Rhine Crossing). He was killed on the first day of the offensive on 24 March 1945, aged 22 years.

He is now buried in Reichswald Forest War Cemetery, Germany.

By Wendy George with kind assistance from Gerald Southam 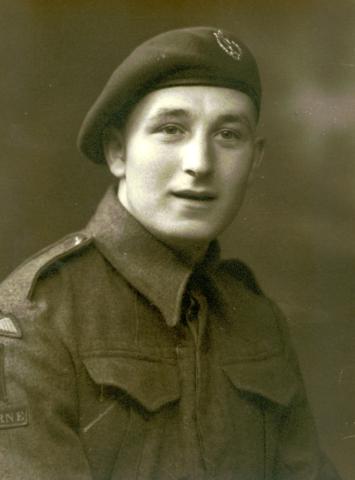