John "Tim" Timothy was one of the longer serving officers of The Parachute Regiment in World War II. He served the regiment with distinction and took part in the Bruneval Raid, as well as airborne operations in North Africa, Italy and Arnhem where he was taken prisoner. Tim subsequently escaped from Oflag VIIB in Bavaria and met up with American Forces. He displayed great qualities of leadership, endurance and courage which resulted in him being awarded the Military Cross on three separate occasions over an 18 month period.

It is estimated that well in excess of 50,000 men served in the British Airborne Forces between 1940 and 1948. Of these, less than 20 soldiers were awarded three, or more gallantry medals for actions in the crucible of battle while serving with British Airborne Forces. Tim sits amongst an illustrious and distinguished group which includes such legendary names as Paddy Mayne, Anders Lassen and Roy Farran of the SAS, Tony Deane Drummond, Alistair Pearson and Johnny Frost.

His full wartime biography and personal experiences are told in Tim's Tale, held in the museum's archive. A summary of the biography is provided below:

Tim enlisted into the Grenadier Guards in 1940 and was quickly identified as officer material. He was commissioned into The Queen’s Own Royal West Kent Regiment on 21 December 1940 and joined the Paras at the formation of the 1st Parachute Brigade in September 1941.

Initially with 2nd Para Bn, he was the Officer Commanding Rodney section on the Bruneval Raid (Operation Biting), a daring raid into enemy occupied France which seized  vital German radar equipment for examination by scientists in the UK.

Later on in 1942 Tim became liaison officer with the first American Airborne Unit into the UK. He holds the distinction of being the first British Para to be awarded American jump wings and also jumped into combat with them into North Africa for Operation Torch having flown 1500 miles from Cornwall.

He rejoined 2nd Para Bn in January 1943 and was involved in bloody fighting against Axis forces in Tunisia where he won his first MC. In the Bou Arada sector he led a night raid which resulted in the capture of a platoon of Italian soldiers providing valuable intelligence for the brigade. Later in the Beja sector his platoon successfully mounted a valiant defence when they became completely surrounded by enemy forces. At the end of this day of bitter fighting Tim attacked a machine gun nest single handed, killing six Germans and bringing back two German machine guns.

Tim missed the Sicily landings due to ill health but was soon back into action when he dropped behind enemy lines for Operation Simcol (October 1943). As a result of his gallantry on this mission he was awarded his second Military Cross. This search and rescue mission for escaped Allied PoWs following the Italian Armistice was highly dangerous, since he was at risk of being shot as a spy by Italians, Germans and British all at the same time! Tim operated for a month behind enemy lines before being lifted off with rescued Allied PoWs by the Royal Navy.

Having completed a company commanders' course in the summer of 1944, Tim was promoted to Acting Major on 1 July and assumed command of R Company 1st Para Bn.

He made his 4th (and final) combat jump into Arnhem. R Company acted as the spearhead for 1st Para Bn in their advance to the objective but quickly came under serious fire from men of the 9th Hohenstaufen SS Panzer Division at Wolfheze. R Company held the Germans at bay while the rest of 1st Para Bn tried to push onto the bridge; as a result of this engagement Tim’s company sustained 50% casualties. Eventually Tim was able to move on and rejoin the rest of 1st Para Bn on the western outskirts of Arnhem near to St Elizabeth’s Hospital on the Monday evening.

Early on Tuesday morning 1st Para Bn led their final attack in an effort to reach 2nd Para Bn at the bridge. The attack was launched against 5 German battlegroups in strong defensive positions. Although initially the attack made good progress it soon ran into serious trouble. By now Tim was back in front leading a bayonet charge for the whole battalion with the 6 remaining men of R Company. They made it to within 1000 yards of the bridge before seeking shelter in a house where they were eventually overrun by the Germans and taken prisoner. For his gallantry and outstanding leadership Tim was awarded his 3rd Military Cross.

As a prisoner Tim was shunted through various camps until eventually in January 1945 they arrived at Eichstatt (Oflag VIIB) in Bavaria. In March, with rumours of the Russians closing in, they were put on notice to march to another camp. While on the march Tim made his escape with fellow Para officer Major Ronnie Stark also a company commander from 1st Para Bn (and who also served with Tim in 2nd Para Bn in Tunisia). They were able to live rough off the land with some assistance from foreign farm labourers and eventually joined up with American forces.

Tim declined the opportunity to take over his old company in 1st Para Bn preferring to return to civilian life now that hostilities were over.

Prior to demobilisation he reverted to the rank of Temporary Captain and acted as military adviser for a film called “School for Secrets” produced and directed by Peter Ustinov.

After his Army service he resumed his post with Marks and Spencer with whom he remained for the rest of his working career. He took well earned early retirement in 1972 and eventually settled in South West England, latterly in South Devon.

Tim passed away peacefully in October 2011 shortly after a presentation to honour his wartime achievements by Lt Max Shackleton, a Platoon Commander from Bruneval Coy, 2 PARA.

His ashes are now interred at Timberscombe Church on Exmoor.

“After a fortnight we were taken for interrogation by a Luftwaffe pilot with a couple of Iron Crosses. 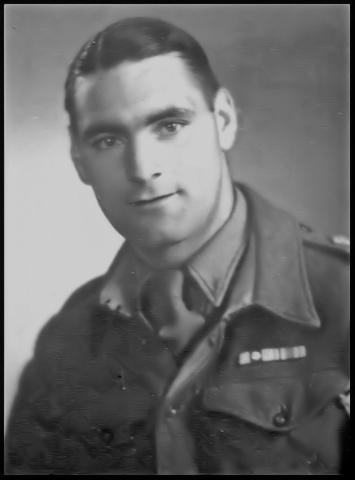 Harvey Grenville said:
Gone but not forgotten, one year on.
24 October 2012.
john english said:
Extraordinary bloke - looks like Superman, and really was a super man.
Add your comment