Captain John Rattray Chalmers Stewart, was the son of Capt C H Stewart, MC, and Mrs Stewart, and husband of Elaine Stewart, of Hillside, Southport, Lancashire. He initially served with 8th Battalion, The King's (Liverpool) Regiment before volunteering for Airborne service as part of No 2 Commando.

By late 1942, he had become Second-in-Command (2-i-c) of R Coy, 1st Parachute Battalion and took part in the North African campaign, during Op Torch. He was awarded a posthumous Mention in Despatches for his actions in North Africa in September 1943.

While R Coy was based at Oued Zarga, near Medjez-el-Bab on 24 November 1942, a joint patrol was organised with the Lancashire Fusiliers to locate the enemy. This comprised of Capt Stewart, 10 ORs including CQMS Cooke (the ex-French Foreign Legionnaire) and a section from the LFs.

The joint patrol was lorried out of Oued Zarga escorted by two Bren Gun Carriers at 12 noon and was ambushed about five miles down the road as it negotiated a narrow cutting. The first fusiliade came from 20 mm Anti Tank Guns aimed at the Bren Gun Carriers who promptly disappeared over the horizon. The enemy then opened up with MMGs, Mortars and a four gun Artillery Battery, one of whose shells hit the leading truck.

The patrol quickly debussed and took up positions around an isolated farmhouse. Capt Stewart and Pte Watton dropped into a ditch and opened up with a Bren Gun aimed at the Anti Tank Guns while the rest of the patrol concentrated on the MMG positions on the hill. Completely overlooked by the enemy with withering fire all around Stewart's men sought alternative positions while Watton covered the patrol with the Bren Gun until he took a direct hit from a 20 mm shell. Capt Stewart recovered the Bren Gun and carried on with covering fire until a mortar shell burst also killed him outright.

CQMS Cooke then took over the patrol and the Germans put down another mortar barrage before launching an assault which was beaten off by grenades and small arms fire. The combined force of LFs and Paras now comprised of mostly wounded men and a further enemy attack ended up in close quarter combat. When they had run out of ammunition CQMS Cooke ordered the surviving men to lay down their arms and they were taken into captivity.

Captain Stewart died on 24 November 1942, aged 23 years old. Reports indicate that Capt Stewart and Pte Watton were given a field burial at Oued Zarga along with 3 ORs from the Lancashire Fusiliers, before being reinterred at Medjez-el-Bab War Cemetery, Tunisia. 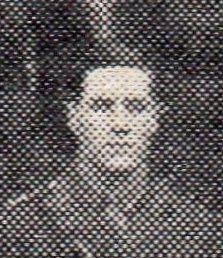