John Peter Rodley, born as Hans Rosenfeld of German origin.  ‘Max’, as he was better known to most of his friends and comrades in the 21st Independent Parachute Coy, was one of the draft of linguists selected to serve with the Company by Major John Lander in May 1943.

He served with the company in North Africa, Italy and Holland. At Arnhem he was Section Corporal with No. 1 Platoon. On 23 September 1944, Max was dug into a slit trench in the front garden of No. 8 Stationsweg. He was trying to locate enemy soldiers firing from houses opposite when he exposed himself to the enemy and was hit by a burst of machine-gun fire which killed him instantly. He was originally buried in his slit trench (see temporary grave photo), but was later reinterred in the Oosterbeek War Cemetery.

Reproduced from “Leading the Way to Arnhem” (ISBN 979-90-812703-1-1) with the kind permission of the authors (Peter Gijbels and David Truesdale) and publisher (Robert Sigmond). Based on the Fred Weatherly Files, Official Records and Personal Accounts of Members of the Company.

If you are part of Corporal Rodley's family and would like to complete this biography, you can apply to the curator to do so. To do this you will need to become a member of ParaData and select the 'friend or family member' option on the registration form. 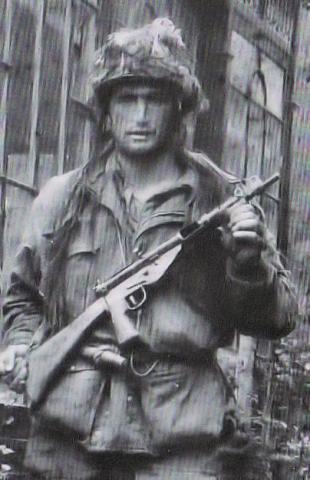