John Novis enlisted into the Sussex Regiment before volunteering for airborne forces.

Private Novis qualified as a military parachutist on course 76, which ran at RAF Ringway from 2 August to 13 September 1943. There was one fatality on the course. The course instructors’ notes state: ‘Pte Novois [sic] Quiet type, cool, confident. Very good all round.”

Sergeant Novis jumped on D Day June 1944 into Normandy on Operation Overlord. He fought at Merville Battery with Lt Col Otway. An account of Sgt Novis’ actions can be found in ‘The Day The DEVILS Dropped In’ by Neil Barber.

He also saw active service in, the Ardennes campaign, Operation Varsity and the Advance to the Baltic.

After the war Sgt Novis served in Palestine. He was demobbed in May 1947.

Back in England he studied and qualified as a draughtsman in the aircraft industry. He later emigrated with his family to Ontario where he continued to work as a draughtsman until retirement.

John attended the annual memorials at Merville until he suffered a severe stroke which prevented him from travelling.

John passed away on the 9 February 2015. He had been unwell for some years.

John leaves a wife, Margaret and son, Martin. He will be sadly missed by family and friends.

Profile image from 'The Day The DEVILS Dropped In' courtesy of Neil Barber.

By Wendy George with information from Robin Stubbs 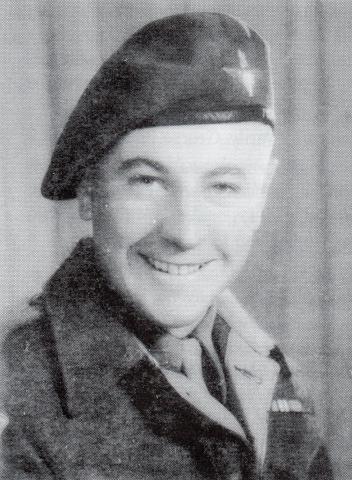