John Sim was born in a tent in Persia. his parents were Eileen (nee Goodbody) and Major Noel Sim of The York and Lancashire Regiment.

John grew up in India where his father was stationed. He was educated at Cheltenham College and was commissioned into his father's regiment just after the outbreak of war in 1939. John was posted to the Hallamshire Bn, Yorks and Lancs in Iceland.

In 1943 he volunteered for the airborne forces. He was parachute jump trained at RAF Ringway on course 80. This course consisted of 8 jumps and ran from 30 August to 9 September 1943. It had an intake of 16 officers and 239 Other Ranks. Soon after this he was posted to The 12 (Yorkshire) Batt. C Coy, and married Heather Foxwell Gray.

In the very early hours of 6 June 1944 he, and 22 of his men dropped into a DZ east of the river Orne from a Stirling aircraft and helped liberate the village of Ranville. Sim was awarded a Military Cross for his actions. The citation reads:

He continued to fight until all but 3 of his men were killed. By his personal example of conspicuous gallantry he held together his force and warded off the attack for 2 vital hours, this enabled a redistribution of troops to meet the armoured threat ensuring the safety of the vital bridgehead held by the airborne troops.

Six days later John was wounded by shrapnel during a battalion attack on Amfreville and Breville. He was sent back to England, but in August he returned to the battalion in time to cross the Seine. John went on to take part in actions in the Ardennes and Rhine Crossing.

After the German surrender John was posted to the Far East to take part in the recapture of Singapore. John, now a major was appointed commandant of the POW Camp at Changi. In Autumn 1945 he was deployed to java to counter the Indonesian National Revolution. Then on to Palestine in 1947.  Before returning to the Aldershot to command Pegasus Company (P Coy).

In 1952 he returned to his old battalion, the Hallams, serving in Khartoum, Eygpt and Dover. This battalion also went to Suez in 1956.  He did an ERE appointment at Old Sarum from 1951 to 1953 Army Air Transport and Development Centre(AATDC) developing the Parachute Regiment Multipurpose Kitbag. He returned again to Para in 1957, for three years as OC PCAU(Parachute Course Administration Unit) at RAF Abingdon.

After several other appointments John at 55, in 1975 was required to retire from the army. However he continued to work for the army at the Army College at Arborfield for another 10 years as a civilian. 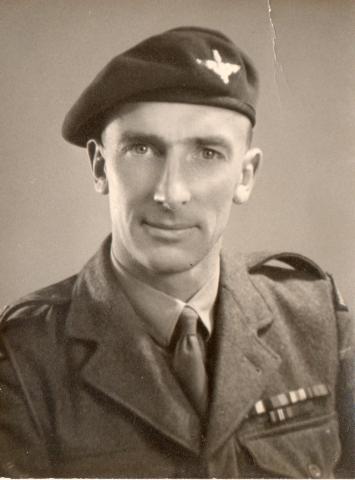