Born in 1921, Myles Henry was of Jewish descent and the son of Arthur and Margaret Henry from Sussex, and husband of Pamela Evelyn Henry (nee Morris), of Mayfield, Sussex. He was educated at Stowe and Queen’s College, Cambridge graduating in 1940. Myles was selected for officer training after volunteering for his county regiment and granted an emergency commission with the Royal Sussex Regiment in 1941.

He served with their 2nd Battalion, commanding a Bren Gun Carrier Platoon, and saw action with the 8th Army in North Africa at the battles of Alam Haifa, Ruwesat Ridge and El Alamein. Shortly after he was hospitalised for several months with a viral infection but rejoined his unit in Palestine.

Volunteers from the 2nd Battalion of the Royal Sussex Regiment formed the nucleus of the 10th Battalion of the Parachute Regiment in 1943 and Myles became a platoon commander in B Company. As part of the 4th Parachute Brigade the 10th Battalion was involved in the seaborne invasion of Italy in September. During the invasion, the Brigade was tasked with seizing Gioia del Colle and its airfield. B Company of the 10th Battalion was despatched as a fighting patrol to reconnoitre the German positions and became involved in a lengthy firefight with German troops. This resulted in 5 killed, 9 missing and 6 wounded including Myles. Shortly after this the Brigade’s positions were relieved and they returned to Taranto. In November the Brigade was withdrawn back to the UK in preparation for D Day and the battalion was billeted in Rutland, with headquarters at Somerby. On his return to the UK, Myles married Pamela Morris.

In 1944 Myles was appointed as the 10th Battalion’s Intelligence Officer. After a series of cancelled 1st Airborne Division operations following D-Day, the 4th Brigade was part of the second lift into Arnhem during the ill-fated Operation Market Garden in Southern Holland in September 1944. The 4th Brigade’s task was to occupy the Northern and Eastern sectors of Arnhem; and the 10th Battalion was expected to protect the left flank of the Brigade’s advance. The Brigade made an opposed drop under fire on DZ-Y Ginkel Heath on the 2nd Day (Monday 18 September).

The 10th Battalion moved off the DZ and in accordance with Brigadier Hackett’s orders halted at dusk, near to the Hotel Buunderkamp, West of Wolfheze. They set off again before first light on the Tuesday morning passing through Wolfheze and LZ-L, North of Johannahoeve Farm, onto the Amsterdamseweg. Leading elements of the Battalion were proceeding along the Amsterdamseweg when they encountered a German blocking line on the Dreijensweg close to pumping station “La Cabine”. The Battalion CO sent Myles Henry forward with most of his Intelligence Section to assess the strength of the German positions and a five hour action ensued pinning the Battalion down. Orders were issued for the Battalion’s withdrawal south of the railway via the Wolfheze crossing with fears mounting that Hackett’s Brigade would be cut off by the Germans. To add to the confusion the Polish Air Landing Units started arriving just as the withdrawal had begun with German troops and armour firing on both the withdrawing men and the landing gliders. During the withdrawal across LZ-L CSM Grainger and Captain Henry were assisting a wounded Lance Corporal when all three were hit by machine gun fire.

Captain Henry died of his wounds on 19 September 1944, aged 23 years old. He was initially given a field burial north of Johannahoeve Farm. Much later he was buried at grave reference 5.D.1 in Oosterbeek War Cemetery, Arnhem.

Originally written for the author’s grandchildren. The book covers a fascinating slice of history from a personal perspective, covering the pre-war era, the war itself and the adjustments of post-war Europe. Copies of the book can be obtained via e-mail enquiry to: curator@paradata.org.uk

Profits from the book go to the Treasure our Young Foundation (CC25044), a New Zealand charity which works to prevent child abuse.

Extract from Chapter 8 'To Have and To Hold', from 'I've Had My Dance' by Pamela Morris

It was a very typical wartime wedding. No long white veils or pretty bridesmaids encumbered us.

Extract from Chapter 7 'The Valiant Warriors', from 'I've Had My Dance' by Pamela Morris

In spite of having received 'an awfully nice letter' from Roberts, who wrote that they all missed him and wanted him back, Myles refused a proff 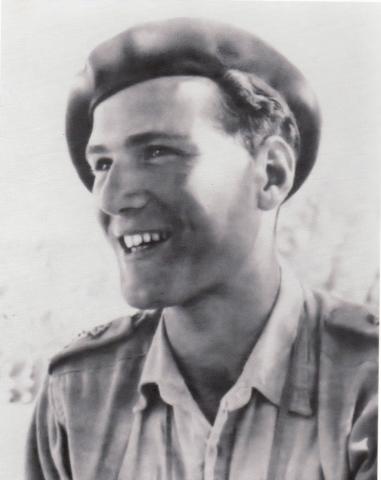