John Morris was the son of Herbert Richard and Aileen Mary Morris and nephew of Mrs A M Sinclair, of Muswell Hill, Middlesex.

He was one of the early members of 21st Independent Parachute Company, joining in August 1942, and taking part in the second parachute course attended by men from the Company, Course No 27 which ran at RAF Ringway from 14 to 24 September 1942.

John served with the Company in North Africa, Italy and Holland, where on 24 September he sustained a gunshot wound in his arm and was evacuated to one of the Medical Dressing Stations, subsequently becoming a Prisoner of War. He was in Stalag XIB and after his wound had healed, was on a working party at a sugar beet factory.

Others in the party report that a large 'spade' rotating in the middle of a freezing unit broke off and hit John's arm. He developed blood poisoning, probably from this incident, and died.

Profile information courtesy of " Leading the Way to Arnhem" by Peter Gijbels and David Truesdale published by Robert Sigmond Publishing 2008. 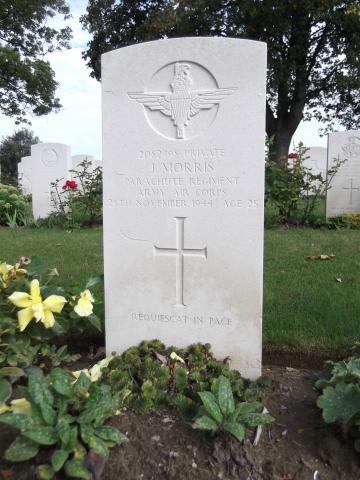