CSM John Kennedy served for 43 years in the military, many of those years as a paratrooper.

He served in the 8th army and also in Cyprus, Aden and Bahrain amongst other arenas. He had four children. He inspired those around him, including his son Alan who also joined the Paras.

He was a brave and courageous man and soldier and is remembered fondly by those who knew him as both.

Created with information supplied by B Mason 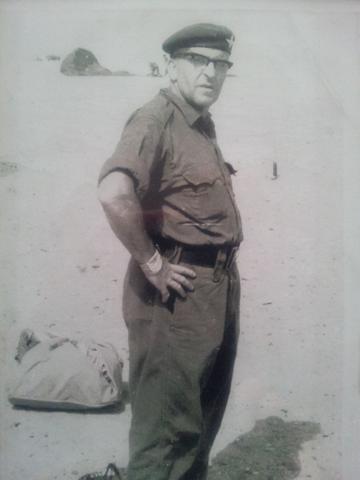 John Widdowson said:
I knew John Kennedy from my time with 16coy, his nickname was nuff nuff which I understood to have come from his habit of shouting enough is enough.
He was regular soldier and I remember him telling of how during the war in far east he had to straighten out the bodies of dead Japanese prior to burying them.
Barry Mason said:
My uncle. Known as Jack. He was a member of the military for 43 years joining as a youngster during ww2 at the same time as his Dad, my grandfather, also John Kennedy. They were both in the 8th Army in Egypt together. He did a couple of stints in Aden and Bahrain that I know of. Also, from what I've been told, fought the Mau Mau in 1956. He was an great influence on me during the time I was growing up which led me to join the Army in 1966, as I was born and bred in London, unlike Uncle Jack who was a Mancunian, I joined the Royal Fusiliers, as was then. It's great to find some of his history here as he passed away some years ago after a long debilitating illness leaving him wheelchair bound. Long will his memory live on in my heart. Uncle Jack, I salute you. Your loving nephew. 24104058 Fusilier Mason.B.
jacqueline kennedy said:
Wow! Barry, Your cousin Jacqueline (still Kennedy) here.So lovely to read your comment.Dad was indeed a very brave courageous man.I think Dad served from 1939-1975-6 which gives him 36-37 years sevice,Gary thinks it was 34 years,either way Dad served a good long stretch. It's on my bucket list to get hold of Dads service record and update his career and maybe add one or two personal tales,of which there are many.What I do know is,he first joined the Paras in 1944 and remained with them untill 1950.He then joined The Royal Welch Fusiliers untill 1955 when he returned to The Parachute Regiment and stayed a Para. He served mainly with 1 Para and 3 Para, finishing off in Lincoln with the 16th Independant. The break from the Paras 1950-1955 was not a personal choice of Dads,more an enforced one.It involed an incident on the top deck of a bus about his first wife,the lady in the photo, that's as much as I can say about the subject on a public platform,but what I can say is Grandma wasn't happy about it. I hope this message reaches you well and happy.Thank you for adding to Dads profile and so great to be reminded of how much Dad ment to you.
Add your comment