He was granted an emergency commission in the Royal Armoured Corps in December 1942, and volunteered for The Parachute Regiment in the following year.

England transferred to the Paras in October 1943 and qualified as a military parachutist on course 92, which ran at RAF Ringway from 17 November to 3 December 1943. The course notes record that he was “keen and reliable, very good performer.”

He served with 8th Parachute Battalion and parachuted onto DZ-K near Touffreville in the early hours of 6 June 1944 as part of the spearhead force for the Normandy landings to liberate France from German occupation. England formed up with about 150 men of the battalion in the Bois de Bavent.

Lt Col Pearson, 8th Para Bn’s Commanding Officer (CO), dispatched England to make contact with a platoon believed to be based at Troarn. However, he was surprised by Germans and taken prisoner while making his way through Troarn.

He endeavoured to make several escape attempts when he was held as a PoW, and eventually succeeded, along with a Lt Col Richardson, while being transported by train to a camp in Paris on 5 July 1944. They eventually made contact with Allied troops on 6 August.

His escape and evasion efforts were later recognised by his appointment as an MBE.

England served as Acting Adjutant on rejoining the battalion and later served as the Intelligence Officer.

He deployed for Operation Varsity, the Rhine crossing into Germany, on 24 March 1945 onboard a Horsa glider with Lt Col Hewetson, who had succeeded Pearson as 8th Para Bn CO. England was killed, and Hewetson injured, when their glider crashed into woods near the landing zone around 11.00 hours. 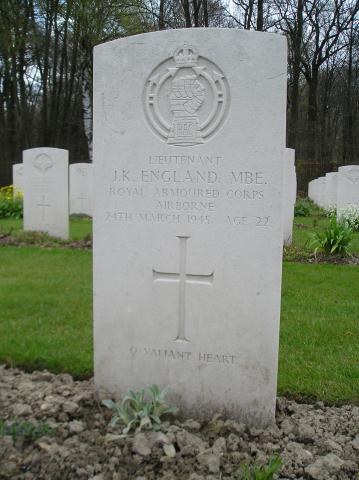