‘Taffy’ as he was inevitably known by his friends and colleagues, was born at Llanwrst, Wales in April 1923, the youngest of four children. He left home at the age of 14 still only able to talk Welsh, to take up a gardening job in Surrey, where his sister lived. In October 1942 he enlisted in the King’s Shropshire Light Infantry, but soon after he had completed training he volunteered for Airborne Forces. He completed selection and parachute training in June 1943 and was immediately sent to North Africa as part of reinforcements for the 1st Airborne Division. He was posted to C Company 156 Parachute Battalion, then in Kairouan, Tunisia. It was not long before he became one of the battalion jokers, often in trouble but sometimes reverting to his native Welsh and pleading ignorance!

In September 1943, 156 Parachute Battalion was the first ashore from HMS Aurora at Taranto, which then fought their way inland against skilful rearguard actions by the 1st German Parachute Division to finally capture the vital airfield at Gioia del Colle some 40 miles inland.

Returning to the UK with the 1st Airborne Division, Taffy along with thousands of men in the formation prepared for the invasion of Europe. For 12 long weeks after D-Day they prepared, stood to, and stood down for numerous planned airborne operations in France and Belgium. Then, finally, in September they were launched into the difficult but enterprising operation Market Garden which aimed to open the door into Germany.

After a heavily opposed parachute drop on the second day at Ginkel Heide, C Company with Taffy, led the advance towards Arnhem. They were soon to meet strong opposition from SS troops and armoured vehicles, north of Oosterbeek, and after a long day’s battle were brought to a halt. Then the battalion, much reduced in strength fought its way through the Wolfheze woods until finally after two days it reached the perimeter at Oosterbeek with fewer than 100 men.

Taffy was wounded in the arm and leg and sent to the medical station at the Schoonord Hotel but it was then captured by the Germans. Taffy along with other walking wounded was taken into Arnhem, loaded onto rail wagons and sent on a long journey with little food or water into Germany; finally ending up at a Stalag near the Czech border. After his wounds had healed Taffy was sent to a labour camp where he worked until liberated by the Russians in April 1945.

In 1946 he was discharged from the Army, but a year later re-enlisted and served in the KSLI and the Durham Light Infantry - at one point serving in the Sudan. After completing nine years combined service he left in 1952. Following his marriage to a girl from Durham in 1954 he moved to the North East where for the next 39 years he worked as a miner but again he had to learn a new language as a Geordie!

Throughout this time he was active with the Royal British Legion helping countless ex-servicemen with their problems. He worked very hard down the pit, to the detriment of his health but was always a good provider for his family particularly in supplying fresh vegetables from his productive garden; being a Welshman he grew many leeks, at one time winning first prize. After his wife died he initially found it difficult to cope, but with his usual resilience and experience of discipline in the Army he took over running the house in a strict and orderly fashion.

In the 1990’s he survived two heart attacks and was eventually accepted to enter as a Pensioner at the Royal Chelsea Hospital where he stayed for five years until his death in January 2008.

By Col J Waddy, compiled for ParaData by Harvey Grenville 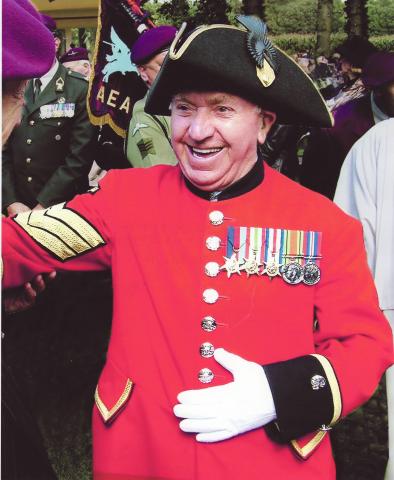