'JJ' Wilson served with Airborne Forces for his entire regular career with Depot, 3 PARA and latterly a spell with 1 PARA with deployments to British Guiana and Northern Ireland during his service. He progressed through the ranks, until being commissioned to serve with 4 PARA, before leaving Airborne service after 27 years, to embark on a further sixteen years with 34 Signal Regiment.

John James Wilson, commonly 'JJ', initially joined the Army in 1965, posted to Depot PARA on 30 January 1965. After completing his training, his first Parachute Regiment posting was to B Company of The 3rd Battalion, The Parachute Regiment (3 PARA) in July 1965. Shortly afterwards, he deployed to British Guiana (now Guyuna) as the Battalion relieved 1st Bn Lancashire Fusiliers on internal security duties, where they remained until February 1966.

In 1977, he was posted to HQ Coy 3 PARA, before gaining a promotion as Sergeant Major to join C Company 3 PARA the following year. Sgt Maj Wilson returned to Depot PARA in 1979 before transferring to The 1st Battalion, The Parachute Regiment (1 PARA) as a Warrant Officer in 1980.

In July 1982, JJ completed his progress as a Senior NCO when he was appointed as the Regimental Sergeant Major (RSM) of 3 PARA, which he held until 1984. Transferred to Depot PARA, he arrived in Aldershot as their new RSM, a position he held until September 1985.

After over two decades of almost unbroken service with Airborne Forces, JJ was granted a commission as a Captain, and appointed Quartermaster(QM) of the 4th Battalion (Volunteers) The Parachute Regiment (4 PARA V). He held the post of QM for three years, before finally retiring from the Regular Army on 11 June 1988. His service was not over however, and he continued with 4 PARA as the Permanent Staff Administration Officer (PSAO) for D Company 4 PARA until August 1992.

Following 27 years with Airborne Forces, Cpt Wilson left the Airborne service in 1992. He transferred to serve a further sixteen years as the PSAO for 50 Signal Squadron, 34 Signal Regimen, based at Darlington, until he finally completed his Army service in 2008.

JJ is still a keen supporter of Airborne Forces, and is an active member of the Airborne veterans community. 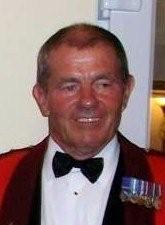