He enlisted into The Bedfordshire and Hertfordshire Regiment on the 28 March 1933. [1]

He was serving with the 2nd Bn, The Hertfordshire Regiment, in early 1944, when he volunteered for Airborne Forces. His battalion had been training as a ‘Beach Group Battalion’, something that he obviously did not ‘fancy’!

He was on Parachute Course 105, RAF Ringway, 1 – 14 march 1944. His Parachute Instructors comments: “Average performer, a confident jumper”. Upon completion he was sent to the Airborne Forces Holding Unit, until assigned to the 21st Independent Parachute Company.

He served in No 1 Platoon, which was commanded by Lieut Herbert David Eastwood.

He was possibly a member of No 3 Section, which was commanded by Sergeant. ‘Ron’ Kent.

On Sunday, 17 September 1944, he took off in one of twelve Stirling aircraft of 190 and 620 Squadron’s, RAF, from RAF Fairford, as part of the pathfinder force for the 1st Airborne Division on Operation ‘MARKET’. He parachuted successfully onto DZ ‘X’, which No 1 Platoon was then to mark out for the 1st Parachute Brigade, and the Divisional troops of the 1st Lift.

1300 hours. Platoons were most accurately dropped in the correct places and what little opposition there was quickly overcome.  Navigational Aids were immediately set out and 20 minutes later the first gliders appeared.  The landings were effected without opposition and all the gliders reported that they had no difficulty in seeing the markings of their correct areas.

1345 hours. The 1st Parachute Brigade were dropped on DZ ‘X’.  The drop was accurate and Battalions were well together.  So far the enemy had made no serious attempt to interfere with the landings.  During the course of the afternoon some enemy opposition was encountered, but the DZ and LZ’s were kept clear.  The night was quiet, all the Company being concentrated round HQ at a farm called REIJERS CAMP.

The next day, Monday 18 September, No 1 Platoon moved to the area of open ground north of the railway line between Wolfheze and Oosterbeek, designated as LZ ‘L’, but being used on this day as a Supply Dropping Point. The task was not easy to accomplish as they came under fire from German Forces in the woods to the north, and most of the supplies were unrecoverable.

On Tuesday, 19 September, No.1 Platoon moved out again to LZ ‘L’ to supply navigational aids for the third lift i.e: the Polish Glider element.  They had to beat off a heavy enemy attack when the gliders were landing.

The Company now moved to an area on the North-western outskirts of Oosterbeek, just south of the railway and dug-in around a house called Ommershof. They were now to become part of the defence force for the ‘Oosterbeek Perimeter’ and would be involved in very heavy fighting over the next six days.

During part of the action in the Ommershof area on the 21 September the fighting became particularly intense: David Eastwood recalled a conversation with a member of his Platoon. “Although ‘Scouse’ McIver was a competent soldier, he was also a ‘barrack room lawyer’, critical of officer’s perks. During the battle he told me that he would never complain again if I managed to get him home. I told him I would do my best and so should he. He kept his side of the bargain.” Private McIver survived the battle and escaped across the Rhine. [3]

By the Saturday, 23 September, No 1 Platoon had moved to the Eastern side of the perimeter, and were defending a row of houses along the Stationseweg. The battle here was also fierce: ‘Sergeant Swallow and his Section were under a murderous fire from all types of small arms and they were also attacked [with] hand grenades. Lieut Eastwood sent Sergeant Sullivan and Private Bruce as reinforcements and they arrived just in time to assist with covering fire as Private ‘Scouse’ McIver made an accurate toss of a grenade through the window of a house opposite. A German machine gun had been firing from the window, but after the detonation nothing remained but a large hole in the wall. The enemy gun had been silenced and no movement was seen in that location for at least the next twenty-four hours’. [4]

Finally on the night of the 25/26 September, what was left of the Company, along with the remnants of the 1st Airborne Division withdrew back across the Lower Rhine to the main Allied Lines.

John ‘Scouse’ McIver also served in Norway, as part of the Liberation Force, May – August 1945.

Shortly before our May Reunion, we were informed by Frank McCausland that John, a former member of the 21st Independent Parachute Company who, unbeknownst to us, was living in an Old Folks Home in Liverpool, had died on 13 April 1991. The Arnhem 1944 Veterans Association and the Merseyside Branch of the PRA got to know of John’s death and connection with the Regiment and arranged a military-style funeral at Anfield Crematorium on 1 May, after which his ashes were scattered on the Garden of Remembrance. John, whose medals have been handed over to the Club, joined the Company after its return from Italy and served with No 1 Platoon at Arnhem and in Norway. We have no further information at the present, as we understand that John had been living on his own for some time and no family has yet been contacted. Neither Frank nor the Club had any contact or news as to John’s whereabouts’ until after the funeral.

The Club has expressed its great appreciation to both the AVC and the Merseyside PRA for arranging John’s funeral. His coffin bore the Union Flag, his medals and beret and was attended by two Standard Bearers, a piper and sixteen ex-Para’s from the AVC and P.R.A.

John McIver, who died on 13 April 1991 aged 77 alone in an old people’s home in Liverpool, had never been traced by the 21st Independent Parachute Company Club despite many efforts over a number of years. John joined the Company in 1944, it is thought from one of the Parachute Battalions, and served with the Companv at Arnhem and in Norway. Somewhat older than most of his comrades, he left the Company when it embarked for Palestine in October 1945, being of an Age and Service Group which prohibited him from further overseas service. Known in the

Company as something of a loner, he is nonetheless remembered as a good and efficient soldier and comrade and it is deeply regretted that the last years of his life were spent without the company of his old friends. With no known next of kin, it was by chance that a member of the Arnhem 1944 Veterans’ Club heard of John’s death and, with the help of the Merseyside Branch of the PRA, was able to arrange a military style funeral. His coffin bore the Union Flag, his beret and medals and was attended by two Standard Bearers, a Piper and sixteen ex-Paras from the Arnhem 1944 Veterans’ Club and The PRA. The 21st Club is indebted to both these organisations for their help in making John’s last journey a fitting one. The Club would appreciate hearing from anyone with knowledge of John’s military history before joining the 21st Ind Coy and would especially welcome any photograph of him. We will remember him. 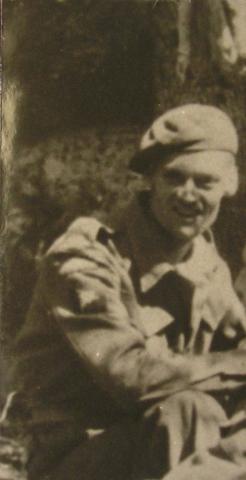