John Joseph Kennell was born on 27 July 1925, the son of John James Kennell and Eliza Kennel. John worked as a Machine Operator pre-war and came from Islington, London. He enlisted in the General Service Corps on 22 September 1943 and upon completion of his training he was posted to the 230th Divisional Composite Company, RASC.

He volunteered for Airborne Forces and after completing the selection process at Hardwick Hall, he was sent on parachute course 104 at RAF Ringway, 21 February to 2 March 1944. His parachute instructors comment was: “Good performer, confident and reliable”. He completed the course of eight parachute descents to qualify as being parachute trained and was posted to the 250th (Airborne) Light Composite Company, RASC on 3 March 1944.

Driver Kennell was assigned as a member of the Company’s Motor Transport Platoon, and for ‘Operation Market-Garden’ he was attached to No 2 (‘D’) Platoon under the command of Captain ‘Paddy’ Kavanagh. The Platoon’s role was to support the 4th Parachute Brigade on the second lift, day two, of the operation.

No 2 Platoon, 250th Company took off from Saltby aerodrome aboard Dakotas of the USAAF’s 314 Troop Carrier Group. No. 2 Parachute Platoon’s task was to collect 4th Para Brigade’s reserve ammunition and equipment (dropped in spare containers) from DZ-Y and subsequently rendezvous with the Jeep Sections which had landed by glider 52 minutes later near Heelsum. Subsequently the platoon was to move to the 4th Parachute Brigade rendezvous and deliver their trailer loads, after which the OC was to report to CO RASC at HQ-RASC 1st Airborne Division.

On 16 September 2015, at 14.30 hours, the re-interment ceremony took place of Driver John Joseph Kennell, of Islington, London. Driver Kennell’s remains were found on 17 September 2012 in a shallow field grave at Ginkel Heath near Ede and subsequently recovered by the RIU. The identification of John Kennell was established through his 1944 Army dental treatment card.

He was re-interred with military honours by a burial party of the 13th Air Assault Support Regiment, Royal Logistics Corps (RLC) in the presence of his next of kin. 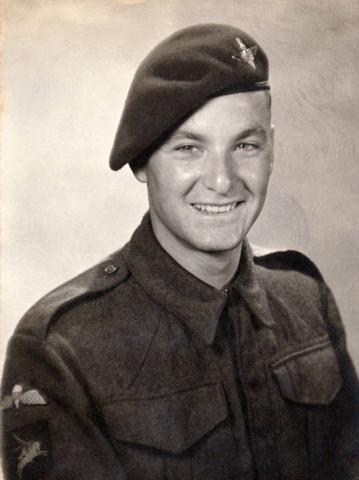