John Cosgrove was born in the early part of 1927, to parents William and Anne Cosgrove (nee Lenighan) Widnes, Lancashire and was just 12 at the outbreak of the second World War. By the end of the War in 1945 he was still too young to enlist.  However it is believed that soon after his 18th Birthday John Cosgrove enlisted and initially was posted to the General Service Corps, whilst awaiting a suitable unit posting.  Eventually he joined the elite Parachute Regiment of the Army Air Corps with the remnants of the 1st Airborne Division, who had been decimated at Arnhem in September 1944 and who were currently serving in Norway overseeing the liberation, again under the command of John Dutton Frost.

During the first post-war deployment in Palestine beginning in 1945 the remnants of 2 and 3 PARA were combined to form the 2/3rd Parachute Battalion, which was disbanded in June 1948. Serving with the 3rd Battalion of the 3rd Parachute Brigade, Pte Cosgrove was assigned to the Gaza region. From tented camps they were tasked with carrying out patrols and searchs in the villages in the Negev Desert before being moved into divisional reserve at Qastina on the 14th April 1946.

Private John Cosgrove died on active service whilst carrying out internal security duties and fighting the Arab and Isreali terrorist groups. His death is recorded on the 11th October 1946, aged 19. It is listed as on active service indicating that he died as a result if an accident or illness. Private Cosgrove is remembered with honour at Ramleh War Cemetery, Israel.

NB. It is not known if Private Cosgrove took part in the last Battalion action before his death, which is recorded as a cordon and search for illegal weapons in an orange grove at Kefar Beilu, on 3rd October. Where using C.R.M.P mine detecting dogs they carried out searches but failed to find anything.

If you are part of Private Cosgrove’s family and would like to add to this biography, you can send your material to the curator. Alternatively friends or family can submit material by becoming a member of ParaData. For further information about becoming a member please visit our registration page. 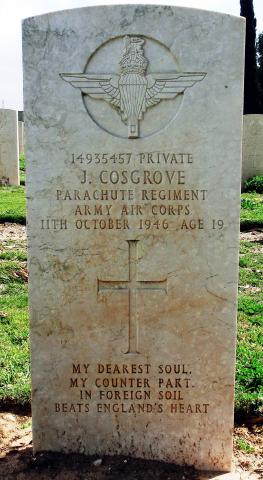