John Howard, known as 'Jack' or 'Kiwi', was a New Zealander who served with 3 PARA in 16 Air Assault Brigade Reconnaissance Force before being killed in action on Sunday 5 December 2010.

Private John Howard was born in Wellington, New Zealand, on 17 April 1987. Having arrived in the United Kingdom he applied to join The Parachute Regiment and subsequently completed the Combat Infantryman's Course held at the Infantry Training Centre Catterick, North Yorkshire.

On successfully passing out in November 2007, Private Howard was posted to 3rd Battalion The Parachute Regiment (3 PARA) in Colchester. On joining the battalion he was posted to B Company and deployed to Afghanistan in March 2008 on Operation HERRICK 8. During his time with 3 PARA, he deployed on exercises in the Netherlands, Norway, Kenya and the USA. Throughout this period Private Howard served with distinction and was identified by his regiment as a potential high flyer with much to offer.

Right from the outset of the tour he rapidly established himself as a leading personality in his section and platoon. His sense of humour and easygoing attitude made him an immensely likeable figure whose friendships with his comrades spanned both rank and age. He had been at the very forefront of all the Brigade Reconnaissance Force operations up to the point when his life was tragically taken.

Private Howard was serving with 16 Air Assault Brigade's Reconnaissance Force on a patrol ten kilometres south west of the provincial capital of Helmand province, Laskah Gah, when he was fatally wounded during an action conducted against insurgents operating in that area.

All of those who knew Private Howard will be poorer for the loss of this engaging, compassionate and inspiring young man. He leaves behind his parents Roger and Anne, two sisters Charlotte and Isabella, and his girlfriend Sophie.

"Our thoughts and prayers are with his parents Roger and Anne and family at this distressing time. We pledge to remember him always and to honour his memory in all of our actions across Helmand over the coming months and beyond. Utrinque Paratus."

Private Howard's family said: "As a family we are absolutely devastated to lose our son, brother, grandson, nephew and cousin. 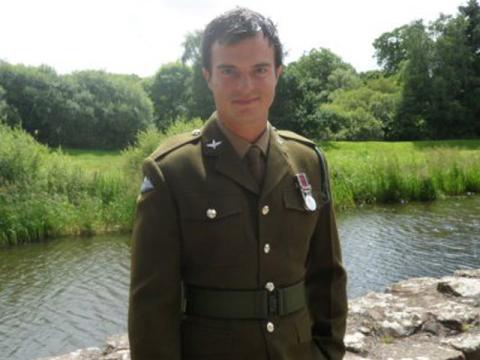 His name will live with us forever."

"Carol and I were saddened to hear of your loss. We send you our most sincere condolences. We are all part of the Airborne Brotherhood and hold your son close to our hearts and know that he had great pride in serving with 3 Para and the
Parachute Regiment.

Andrew Brown
ex 2 PARA, Chairman,
PRA Wessex Branch."
David Featherstone said:
So young, but a true warrior. RIP
Malcolm Reid said:
Go ahead of us airborne brother, in death as in life, lead the way
Robert Hopkinson said:
Another young man who gave his all,
And will be in the memories of all,
Family, friends, comrades, and the buddies that survived,
I salute you for your service and honour.
Steven James Hughes said:
Here's a tribute to an Airborne Warrior who joined the ranks of The Brave who have laid down their lives in the Defence of Freedom.
Steven Hughes
RMO 2 PARA 1982 - 1984
Malcolm Rowlands said:
We are so proud that John came half way round the world to join our Airborne Brotherhood, but so very sad that he should have paid the ultimate sacrifice. We shall remember him with pride and gratitude.
Malcolm Rowlands
ex 1 PARA, Secretary,
PRA West Berkshire Branch
Hew Pike said:
Our hearts go out to your family. We salute your example and mourn the loss of a young man on the threshold of life, as we mourned the loss of your fellow New Zealander Dickie Absolon, of Palmerston North High School, killed in action with 3 PARA in the Falklands Campaign of 1982. Like you he was a Pathfinder.
Utrinque Paratus.
Hew Pike
CO 3 PARA 1982
Patrick Peters said:
As your good soul finds its way to the Airbourne Gates of heaven, you will be remembered here on Earth, you'll be forever our 'B'Coy hero. My thoughts of sincere sadness to your Dad and Mum at this time, hold your heads high and be proud of John. He fought and died in the best Regiment in the world, 3 PARA!
Utrinque Paratus.
Pat Peters
3 PARA 1963/72
John Wilson said:
Our thoughts are with you at this sad time.
JJ Wilson
3 PARA 1965-84
Scott McJorrow said:
So sorry for you family and your mates that they have lost you for now Jack. Though some may never have known you, all should never forget you. You have done New Zealand proud. Thank you.
Stuart McLaren said:
Along with my sincere condolences to John's family, girlfriend and friends I have a message from friends of mine in Arnhem, Holland. From Arnhem my condolences to the family of Private Jack Howard another young life ended in a distant land far from his beloved family and girlfriend, there are no words for his loss but try to be strong together to be in this difficult days. I will burn a candle for him in the Church of Arnhem.

David Murphy said:
Rest in eternal peace John.
Spud,
23PFA - Anti-Tank Plt. SP.Coy. 10 PARA.
David Needham said:
My thoughts go out to your family at this time, being the family of a soldier is never easy , but it was the life you and many of us chose to follow.