Private John Hope was the son of James and Mary Hope, of Cliffe Castle, Yorkshire.

He volunteered for airborne forces while serving with The Black Watch during World War II and qualified as a military parachutist on Course 130 which ran at RAF Ringway from 21 August to 2 September 1944.

Pte Hope subsequently served with 5th (Scottish) Parachute Battalion in Greece and after the war deployed with the battalion to Palestine for internal security duties.

He was killed during an attack by members of the Stern Gang on the guard of a Divisional Car Park in Tel Aviv. (See account below.) 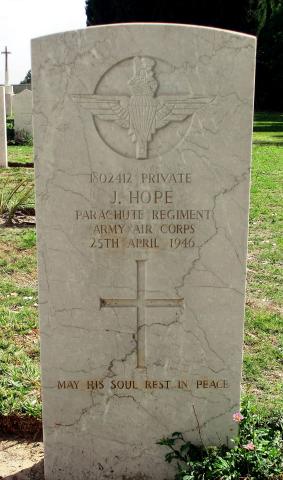