John Alexander Gilliard was the son of Charles and Mary Gilliard, of Rathfarnham, Co Dublin in the Irish Republic.

He volunteered for British Airborne Forces while serving with The Royal Ulster Rifles during World War II, and qualified as a military parachutist in Italy.

It is believed that he served in Greece with S Coy, 5th Scottish Parachute Battalion, and later deployed with the battalion to Palestine.

He was killed, while unarmed, during an attack by members of the Stern Gang on the guard of a Divisional Car Park in Tel Aviv. (See account below.) 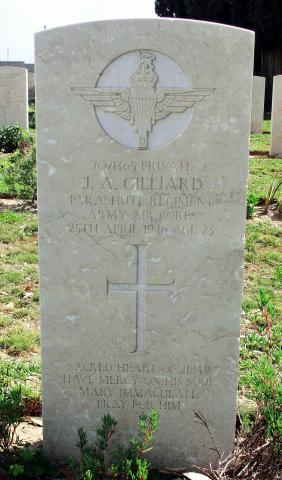