John Gordon Slater was born in Epping, Essex on  5 August 1923. As soon as he finished education in Brentwood Scool (1943) he entered the Army as a 2nd Lieutenant in the Royal Artillery, soon after he volunteered for parachute training and was attached to the newly formed 6 Airborne Division. The unit he served mostly with was the 3 Airlanding Anti-Tank Battery, which consisted of 3 troops of 4 x 6 pounder guns and 1 troop of 4 x 17 pounder guns.

John first saw action with his battery in the Belgian Ardennes (it had arrived at Ostend on Christmas Day 1944) where it, and other elements of the 6th Airborne Division had been sent in an attempt to halt Hitler's thrust to re-capture Antwerp and the Belgian Coast from the allies. It was the coldest winter in living memory, fighting was ferocious and, as we now know, Hitler's gambol became a great defeat for him.

3 AL ATk Battery returned to Bulford and once again went through rigorous training for glider borne operations, it was now part of the newly formed 2nd Airlanding Anti-Tank Regiment RA.

In March 1945 the glider element of 3 Battery left Bulford for East Anglia, where it was soon to take off as part of Operation Varsity, the airborne crossing of the River Rhine.

At 07.15 Hrs 23  March 1945 the complete fighting element of the battery was airborne. The battery's objective was the village of Hamminkeln, on the North bank of the Rhine. Casualties were heavy, among them was John's best friend, Captain Alan Saviour, he was injured on landing, could not escape the burning glider and is buried in the Reichswald Forest War Cemetery, John visited his grave on the 40th anniversary of Varsity in 1985.

During the hectic fighting to secure the landing zone, John and his men came under fire from a farmhouse, and were about to throw grenades through the window, when an anguished shout came from inside "don't shoot limeys, its Yanks in here!" Sure enough a downed American aircrew had been taken prisoner there, their erstwhile captors had made a quick exit through the back door.

John visited the farm again in 1985 and noticed much of the fencing round the farm was now made of wood from his gliders!!

The battery and other units of the 6th Airborne Div then raced northwards where they became the first British unit to reach the Baltic coast. Having entered the town of Wismar the red berets met up with the Russians,

Very soon after that meeting, the barriers went up between the British and Russian troops, a foretaste of what Churchill was later to call, the Iron Curtain.

By the 19 May 1945, 3 Battery was back at Bulford. John had not much time to 'make up for lost time' with his wife, she was a member of ATS (Royal corps of Signals attached) telephonist. They had met before he joined 4 Airlanding Anti-Tank Battery on their voyage to Java.

Before the War, Java (after independence it became Indonesia)had been a Dutch colony, but was over run by the Japanese, but after the surrender of Japan the Javanese did not wish to see the return of the Dutch- things became a bit unpleasant and anarchy soon broke out, with freedom fighters taking on any one opposing them, including of course the remaining surrendered Japanese forces. Knowing that the Japanese had built up much experience in the type of jungle operations, Japanese forces were co-opted along with the victorious allies to bring a situation of near normality back to Java, during this period 4 Battery used their guns to bring down fire on disruptive elements.

Captain John Slater was then posted to Palestine, where he rejoined 3 Battery. He was there just a short time during the hectic period leading up to the foundation of Israel, and from there back to Bulford.

Not long before he died, John and his wife had the honour of being presented to Her Majesty the Queen at Larkhill, the Queen looked closely at John's medals, on seeing the bars to his GSM HM said "You had a hectic war"!

Created with information and images kindly supplied by his his son Steve Slater. 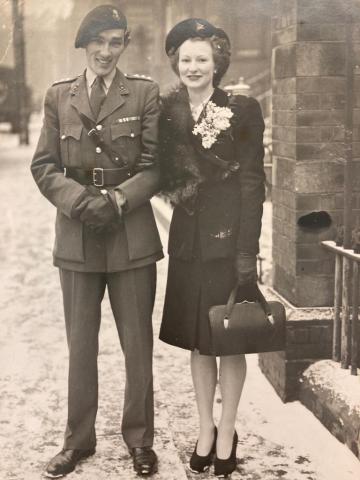