Lt Col John Frank Rock was the son of Frank Ernest and Alice Maud Fanny Rock, of Cranleigh, Surrey. He served with the Royal Engineers and was later attached to 1st Wing Glider Pilot Regiment.

He died of wounds on 8 October 1942, aged 37 years old, as a result of an accident in a Hotspur glider trial on 27 September 1942. He is now buried at Tidworth Military Cemetery, Wiltshire.

Airborne forces, as with most elite military units, were not created overnight, but rather, were moulded and shaped by men of foresight, vision and determination. Such a man was Lt Col John Frank Rock RE.

The Central Landing School was opened at Ringway Airfield, near Manchester, on 21st June 1940, under the command of Sqn Ldr L A Strange assisted by Sqn Ldr J E Benham. Three days later Major Rock and Captain Lindsay arrived as the senior army officers.  An impression of the kind of energy that Rock was capable of may be seen by the fact that the first 'Live' jumps were commenced on 13th July, less than 3 weeks after his arrival. When, a week later, the first fatality occurred, he again showed his mettle by insisting on being the first to jump when training recommenced on 8th August, as he did on all occasions where an injury or fatality threatened the morale and confidence of his troops.

By the spring of 1941, the Central Landing School had become the Central Landing Establishment (CLE) and was visited by Winston Churchill, Rock having been promoted to Lt Col on 9th February 1941. Churchill had, early on, accepted the case for Glider Operations in conjunction with parachute troops and with the CLE at maximum output Rock's talents were  now focused in this direction. He was appointed CO of the Glider Pilot Regiment on 21st December 1941.  From 22nd December 1941 continuously until 9th September 1942 he learned to fly from scratch. Elementary training followed by advanced on Magisters and then converting to Hotspur gliders and finally the large Horsa Gliders. Less than a month later he was to die tragically. On the 27th September 1942, during a night flight at Shrewton, the towrope of his Hotspur Glider broke and he was injured when he crashed into a telegraph pole on landing. He died on 8th October 1942 at Tidworth Hospital.

He was 37 years old and unmarried. His next of kin was his sister, then Miss M A Rock. Amazingly his only decorations were the 1939-45 star and medal, awarded posthumously on 8th April 1949.

Although he has been largely ignored by the annals of history, his achievements can never be. The legacy of pride and ability that he began in 1940 thrives in today's airborne soldiers, not just in our army but in the armies all over the world that have based themselves on his model. The tradition of ABI 'airborne initiative' that is such a vital component of today's parachute soldier, can be traced directly to the early days at Ringwood and John Rock’s inspiration.

The Official War Office Record, Airborne Forces, compiled by Lt Col TSH Otway DSO says: “The greater part of the credit, on the Army Side, for the success of the initial experiments and trials must go to Major Rock, whose unfailing courage and determination in the face of all difficulties was an inspiration to others". 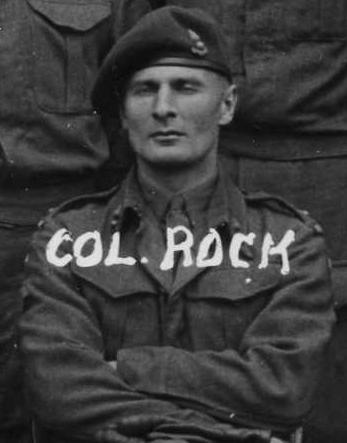