John ‘Jack’ Lord was born in Leicester as the son of Frederick Arthur and Alice Mabel Lord. He was husband to Muriel Catherine Lord, of Morden, Surrey.

He originally joined the British Army in the mid 1930s after working as a printer in Hinckley. 'Jack' Lord was released from service in 1938, but was recalled to the colours the following year as war broke out.

He took part in the Normandy Campaign with the 6th Airborne Division and probably landed as part of the follow-up forces over the beaches between 7 – 8 June 1944.

Jack Lord eventually returned to England in September 1944 and then took part in the Ardennes campaign, December 1944 – February 1945.

On 24 March 1945 he took off for Operation Varsity, the airborne assault across the Rhine, in a Horsa Mk II from RAF Dunmow.

Unfortunately the glider was hit by anti-aircraft fire as it approached the landing zone and crashed 4000 metres to the north of DZ A. All the occupants were killed by machine-gun fire. 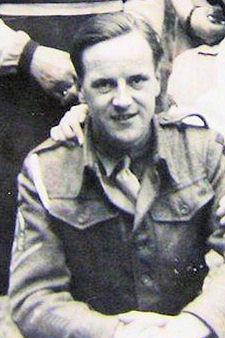