John Daniel Baskeyfield was the son of Daniel and Minnie Baskeyfield, of Stanfields, Stoke-on-Trent.

For his actions at Arnhem, he was posthumously awarded the Victoria Cross on 23 November 1944. His Gazette entry for the award reads:

"On 20th September, 1944, during the Battle of Arnhem, Lance-Sergeant Baskeyfield was the N.C.O. in charge of a 6-pounder anti-tank gun at Oosterbeek.

During the early stages of a heavy enemy attack, the crew commanded by this N.C.O. were responsible for the destruction of two Tiger tanks and at least one self-propelled gun, thanks to his coolness in allowing each tank to come well within 100 yards of his gun before opening fire.

Lance-Serjeant Baskeyfield was badly wounded and the remainder of his crew were either killed or severely wounded, he refused to be carried away from his post, and when the attack was renewed he manned his gun alone and fired round after round until his gun was put out of action. His activity was the main factor in keeping the German tanks at bay, and his example and his courage were responsible for keeping together and in action the surviving men in his vicinity.

When his gun was knocked out, he crawled to another nearby which was left without a crew, and succeeded in putting out of action another self-propelled gun before being killed.

Lance-Serjeant Baskeyfield's supreme gallantry is beyond praise. During the remaining days at Arnhem stories of his valour were a constant inspiration to all ranks."

Lance Sergeant Baskeyfield died on 20 September 1944, aged 22 years old. He is now commemorated on the Memorial at Groesbeek Canadian War Cemetery, near Nijmegen. 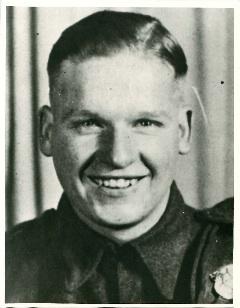