John Cecil Horner was born on 17 November 1920, the son of Harold Wallington and Norah Horner of South Godstone, Surrey. He was educated at Radley College, where he rowed and became Head Prefect, leaving in 1938 to join a firm of chartered accountants and then enlisted into the Territorial Army in June 1939.

He was granted an emergency commission, as a Second Lieutenant, in The Devonshire Regiment in November 1940. He volunteered for airborne forces in 1942.

Lieutenant Horner qualified as a military parachutist on course 25, at RAF Ringway, 31 August to 8 September 1942. Later he also attended parachute course 61B/62, at RAF Ringway, 26 April to 4 May 1943. This was shortened, due to operational reasons and only 2 x balloon and 3 x aircraft descents were carried out. His instructors’ comments read: “Good performer. Has troops well in hand.”

He was sent with a draft of re-enforcements to North Africa in May-June 1943 and was assigned to command 9 Platoon, C Company, 2nd Parachute Battalion.

Lt Horner took part in Operation Fustian, the 1st Parachute Brigade’s action to capture the Primosole Bridge in Sicily on the night of 13/14 July 1943.

Lieutenant Horner was killed in action on the 14 July 1944, aged 22, and is now buried in Catania War Cemetery Sicily (grave reference II A 24).

We landed off the D.Z.[drop zone] at a point North of Lentini, 945662, at 22.55 hrs. On landing I captured the German driver of the anti-para patrol truck. I took him along and collected members of my stick. I had 23 men and we were under M.G. and Mortar fire most of the time. At about 23.20 hrs I challenged a party on the move - it was Lt. Horner and his stick. As we could not move North owing to the M.G. fire we went south and then swung round and moved in a northerly direction, trying to reach the correct D.Z. and F.U.P.[forming up point] During this move the prisoner was killed. I left two men and a Bren to cover our advance and discovered that there were only eleven of us left. I heard the Bren open up but did not see the two men again.

At about 24.00 hrs the officer decided that as we were too far from the remainder of the Bn to push forward and carry out sabotage work on the way.

We march forward and at about 01.00 hrs, 14.7.'43, we saw a glider pass over head being fired upon by troops in half-tracks. We reached Piccadilly and laid our A/T grenades as there appeared to be a lot of traffic on the road. One enemy truck was blown up as we moved off. We continued to advance and came upon an ammunition dump unguarded. The officer fixed two grenades in it so that the slightest movement would set them off. We carried out and passed an enemy camp and patrols. As dawn was beginning to break we laid up in an olive grove. At about 07.00 hrs we saw the enemy retiring North from Lentini. This withdrawal went on all day, armoured and heavy transport included. We saw the enemy lay mines.

We were relieved by forward elements of the 8th Army at about 17.40 hrs. While the officer was telling the forward carrier driver where the mines were some Kittyhawks were fired on by an infantry L.M.G. They attacked and dropped a bomb which hit the carrier and killed Lt. Horner. We were then evacuated. 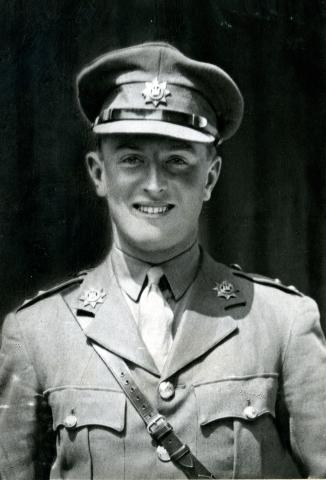