John Charles Driver was born at Leicester on February 17 1922 but was taken to Scotland when his father was posted to Leu chars with the RAF. He was educated at the Central School, Dundee, and at 18 traveled south to join the Middlesex Regiment in London.

Told that he could not join the Parachute Regiment until he was 21, Driver was sent to the Army Air Corps. But he failed the flying tests and arrived in the 4th Battalion six months before it was posted to North  Africa.

He won the mile and the three-mile running races in the Mediterranean Games during training and was emplaned for the invasion of Sicily, but his aircraft never took off. Eventually, the battalion arrived by ship at Taranto to begin a grueling six months patrolling on foot. mostly alongside the New Zealand Division.

As a member of C Company of the 4th Parachute Battalion, he was sent to the objective on December 8 1943 in the belief that it was undefended.  But the position had been reinforced with machine guns, and no cover was available.

As the unit's bomber, Driver's job was to advance to throw his grenades, which he duly did. Then, standing up to enemy fire at point-blank range, he killed several Germans. When his ammunition was spent, he seized the weapon of a wounded comrade and continued firing as a shower of grenades was hurled back at him.

The attack proved unsuccessful, but the citation for Driver's MM said that he acted without regard for his own safety and that his fine example was largely instrumental in the platoon's inflicting considerable casualties on the enemy.

Following the action in which Driver won his MM, the platoon returned to its company headquarters, where five men were killed and four wounded by mortar fire. On being sent to the Cassino area,  they found that the mud made handling equipment extremely difficult;  and all action was called off for a time when the snow was more than 4ft deep.

Later they settled in a farmhouse near Lanciano bridge,  where they removed slates to fire through the roof. One man was killed while cooking breakfast, and Driver was hit in the calf by a shell splinter.

Convalescing at Sorrento, he was unimpressed by news of the Normandy invasion,  saying that he and his comrades had been involved in numerous "D-Days" over the past year. After being dropped by an American aircraft 20 miles off their destination in the south of France, the platoon formed a line outside a smallholding before laying down smoke and charging the position.  Several days after taking it over they discovered an American hiding in a cellar -  he had thought they were Germans.

Driver's war came to an end when he returned from a night out to be told that his bags were packed and he was off to Greece. But when his unit was dropped on Megara airfield, 40 miles west of Athens, the men felt into a 35mph wind. Three were killed,  and Driver was one of 40 injured;  his arm was badly broken,  and he suffered serious abrasions.  He had been dragged back by his parachute,  which had failed to collapse.

On coming out of the Army he returned to Leicester,  marrying  Pat Waterfield,  with whom he had a son, and settling down as an electrician.  Taking up running again with the Leicester  Harriers, he won the 1,500-metre local event and the Livingston Road relay. While working on the new physics block at Leicester University in the early 1960s he was invited to join the staff, and duly rose to become chief technician.

Jack Driver was a founder member of the Oadby Golf Club and enjoyed growing tomatoes and a pint of Tiger Bitter. 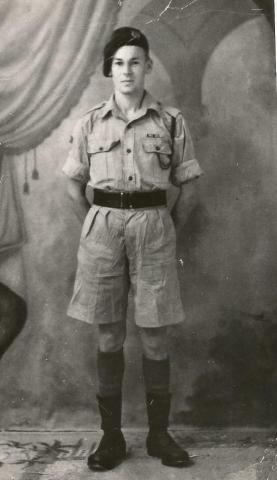