John Christopher Clapham Maude was born in Manchester in 1920. He was educated at Haileybury and commissioned into the King’s Shropshire Light Infantry in 1938. Called up on the outbreak of war, he was sent as a second lieutenant in charge of 43 men, most from the volunteer Militia force, to guard an airfield near Dieppe taken over by the RAF from the French.

Shortly after the onset of the Blitzkrieg in the Low Countries and Northern France, the RAF squadron on the airfield was ordered home, and as the administrative staff in Dieppe prepared for evacuation Maude was given 50 Royal Engineer and Pioneer Corps reinforcements, extra light weapons and ordered to keep the airfield available for aircraft until further notice.

Maude improvised anti-aircraft mountings for the Lewis guns. Twenty to thirty RAF aircraft landed each day requiring refuelling and food for the pilots. Maude had no other contact with the outside world until 2/7th Battalion The Duke of Wellington’s Regiment passed the airfield en route for Dieppe. The commanding officer told him to wait for arrival of the 51st Highland Division, then to render the airfield unusable and withdraw with the Highlanders to St Valéry-en-Caux. Maude burnt 10,000 gallons of fuel, induced a farmer to plough the centre of the strip, covered the rest with carts and mined the entrances.

On withdrawal towards St Valéry, he was warned of the impossibility of the Navy taking troops off from there, so he made for the nearby cliffs, found a path down to the beach and called a ship by flashing a torch. Although wounded during the evacuation he got all his men away, except for several killed when a rope of rifle slings broke as they lowered themselves down the cliff. Most unusually, the citation for his Military Cross was initiated by the C-in-C of the British Expeditionary Force, General Lord Gort.

After joining SOE Maude trained as the leader of a Jedburgh team, one of 94 each comprising two Allied officers, one usually French, and a sergeant radio operator. Unlike other SOE agents, the Jedburghs dropped in uniform after the invasion of Normandy with the task of contacting French Resistance groups, calling for airdrops of arms and explosives and ensuring that the consequent sabotage did not damage facilities the Allied forces might need.

His team, codenamed Nicholas, comprised himself, Lieutenant Henri Penin and Sergeant Maurice Whittle. They were dropped on the night of September 10, 1944, in Haute-Saône. His objective was to contact the Premier Régiment de France, a Vichy unit reported to have joined the Resistance. The drop was accomplished but it was 50km from the last known location of the Premier Régiment. They lost their radio but recovered it with the help of the leader of the local Maquis, who guided Maude’s team to a larger group at Magny-les-Jussey, some 20km away. Almost immediately a German battalion began an operational sweep through the woods. Maude and Sergeant Whittle escaped with the radio while Penin kept in touch with the Maquis. The team were reunited the following afternoon, and hearing that German units were moving eastwards by every available road Maude reported this to London, with news that the enemy was preparing to concentrate at Luxeuil-les-Bains, 20km farther east.

The Premier Régiment de France was not located, so Maude’s team were instructed to return to England when they were overtaken by the advancing Allies. Compared with other Jedburgh operations, many of which achieved remarkable success, Maude did not rate his very highly. Even so, he had made resolute efforts in the face of significant danger and was awarded the Croix de Guerre.

In England the Jedburgh teams were briefed to parachute into German PoW camps, ahead of the Allied advance, and lead the prisoners to safety. The swift progress of the war rendered parachuting unnecessary and the teams were flown in. Maude was mentioned in dispatches.

After the war he became a farmer and built up a herd of Friesians. He served for many years as divisional secretary of the Soldiers’, Sailors’ and Airmen’s Association for Winslow, Buckinghamshire. With 13 other over 70-year-olds formerly of the Airborne Forces, he made a parachute jump into Studland Bay, Dorset, in 1990, raising £45,000 for military charities.

He married Diana Davenport, also a member of SOE, in 1945. She predeceased him, as did his second wife, Bridget Battersby, whom he married in 1973. He is survived by three daughters of his first marriage. 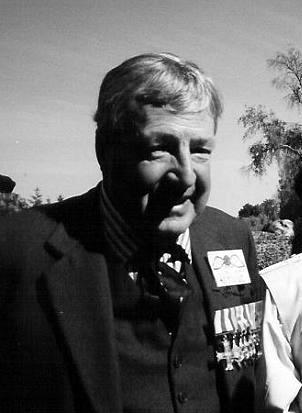