John Charman Box enlisted into the Westminster Dragoons during World War II. Later in 1943, as part of 86 Troop, he attended 100 Royal Armoured Corps Officer Cadet Training Unit and was granted an emergency commission on 12 December 1943 as a Second Lieutenant.

On 1 April 1944, John transferred to the airborne forces and joined 12th Battalion The Devonshire Regiment which formed part of the 6th Air Landing Brigade in 6th Airborne Division.

On 12 June, John was promoted to War Substantive Lieutenant.

John was deployed into combat again on 24 March 1945 for Operation Varsity, the Rhine Crossing, which required American and British Airborne Forces to establish a bridgehead east of the Rhine in the Wesel area for advancing Allied troops. The Devons were tasked with the capture of the village of Hamminkeln.

The battalion took off from a Norfolk airfield and, after a four hour flight, landed in the Hamminkeln area at around 10.40 hours against considerable flak and some ground opposition. The large amount of smoke laid by the enemy over the landing zones made it almost impossible for the glider pilots to find their bearings, resulting in several crash landings.

One such crash landing was to have tragic consequences for John’s friend. Shortly after exiting his own glider John witnessed the death of Charlie Cox, a Canadian, who was hit by the wing of another glider as it crash landed. He was greatly saddened by this and remembered Charlie very fondly for the remainder of his life.

After the initial heavy fighting the division made a rapid advance and by 23 April the battalion had moved to Stadorf, which was designated as a training area. It commenced equipment maintenance and training, including a Junior NCO training cadre established under the command of John Box using the NCOs from the battalion’s recce party as instructors.

Later that year, after returning to the UK, John transferred to The Parachute Regiment on 29 September and attended Parachute Training Course 184 which ran at RAF Ringway from 8 to 29 November 1945. A fatal parachuting accident on this course caused at least three refusals to jump. On qualifying as a military parachutist John was initially posted to the reserve battalion.

He arrived in Palestine in March 1946 having embarked on a troop ship at Liverpool at the end of February.

John served for six months with Headquarters 1st Parachute Brigade, and returned to the UK in September for demobilisation leave prior to his transfer to the Army Reserve on 27 November 1946.

Compiled by Harvey Grenville with the kind assistance of Adam Box 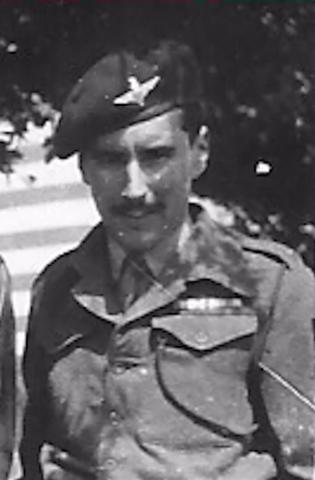