John Burden Sanderson was granted an emergency commission with The Loyal Regiment on 28 December 1940.

He volunteered for airborne forces while serving with the Indian Army and served as a Temporary  Major with 152 Indian Parachute Battalion, 50th Para Brigade, in Burma 1944.

John was one of the few survivors of Sangshak and made his way back after the battle to Imphal with a seriously wounded fellow officer.

In the ARAKAN campaign he caught Malaria and was afterwards fortuitously picked up by a Royal Navy Motor Torpedo Boat. In Thailand he  jumped by parachute to liberate a Prisoner of War camp.

John transferred to The York and Lancaster Regiment in 1946 and his Army career included postings as Military Attaché in Sofia, a General Staff Officer with Supreme Headquarters Allied Powers Europe (SHAPE) and Allied Forces Central Europe; and a Liaison Officer in Germany.

After retiring from the Regular Army in 1974 he served for ten years in the Territorial Army as a member of the Non Regular Permanent Staff and finally retired from service in 1984.

Images in this profile appear in a book by, published by Pen and Sword Feb 2019: 'Secret Service in the Cold War.' by  Myles Sanderson).

Created with images and information kindly supplied by Robin Sanderson. 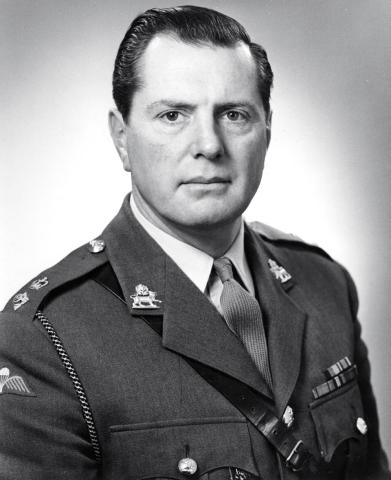