Private Joe Whittaker, a Territorial Army reservist serving with the 4th Battalion The Parachute Regiment, was killed by a mine in Afghanistan in June 2008.

Joe attended Warwick School where he was a member of the Cadet Force. Leaving school, Joe joined 67 Signal Squadron, 37 Signal Regiment in 2005 and completed his basic training with them before he transferred to The 4th Battalion, The Parachute Regiment (4 PARA) in October 2007. He was a enthusiastic member of 4 PARA making the round trip from Stratford-Upon-Avon to London for weekly drill nights.

In 2008, he volunteered to go on his first operational tour to Afghanistan, during the Herrick VIII deployment, attached to 2 PARA Battle Group. having volunteered for a tour of Afghanistan. He had recently passed his Officer Selection and planned to attend RMA Sandhurst shortly after his return from Afghanistan. He was keen to become an Apache pilot.

Private Whittaker died when he was caught in an explosion from an IED in the Upper Sangin Valley in Helmand on 24 June 2008. Sgt Major Williams, of 2 PARA was also killed that day.

"Yesterday the battalion lost one of its most senior and its most junior soldiers. Sergeant Major Michael Williams joined the regiment in 1986, Private Joe Whittaker was a reserve soldier from 4 PARA and part of a 48 strong contingent of 4 PARA integrated into 2 PARA Battle Group for our tour.

"Sergeant Major Williams died commanding C (Bruneval) Company's Fire Support Group while the Company was in contact in the Upper Sangin Valley. Private Whittaker was part of a mine detection team and was killed helping to ensure that the large vehicle resupply convoys could reach our Forward Operating Bases.[...]

"These two men were very different in age, experience and rank, but both were inspired by the challenge of service with the Parachute Regiment, and the very difficult task that confronts us each day here in Northern Helmand. Both were respected and both will be sorely missed by their friends and the Battle Group, but most of all by their families.

"They join five other brave members of 2 PARA who have given their lives in recent weeks. The Regimental Motto is 'ready for anything'; Sergeant Major Michael Williams and Private Joe Whittaker were ready for the risks they calmly accepted on the day that they died. They are an example to the rest of us, and their courage and commitment will spur us on to give our best to improve the situation here, no matter how difficult or dangerous other people may tell us that will be. Utrinque Paratus."

"Pte Joe Whittaker was 19 years of age when he passed P-Company, allowing him the honour of wearing the maroon beret. Joe had that infectious optimism that goes with all young Paratroopers. Forthright and courageous, he showed great spirit and committed himself wholeheartedly in any task given to him. His slim build belied strength beyond his years.

"Afghanistan was his first operational tour, and he showed no fear when chosen to be part of the Op BARMA team, a job fraught with danger. In fact, Joe relished the chance to be out on the ground and prove himself to his more experienced comrades. Joe Whittaker died a paratrooper. Even at such a young age he displayed all of the attributes specific to men of The Regiment, and we are proud to have known him and to have stood alongside him. Today, a good soul has left us, and he will be greatly missed. We, his brothers who are left, will never forget him."

With assistance from Becks Skinner 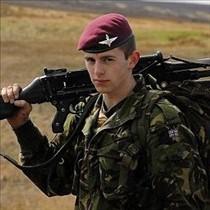