Jevon Albert "Jeff" Nicklin,was the son of Percy Harold and Eva Louise Nicklin and husband of Mary Eileen Nicklin, of Port Credit, Ontario. Before enlistment 'Jeff' was an all-star with the Winnipeg Blue Bombers and was part of the team's Grey Cup victories in 1935 and 1939. He cut short his successful football career to enlist with the Royal Winnipeg Rifles.

After volunteering for airborne forces, he was posted to the newly formed 1st Canadian Parachute Battalion in 1942.

Lieutenant Colonel Nicklin took over command of 1st Canadian Parachute Battalion in just prior to 1 November 1944 and ‘by sheer determination, enthusiasm and great devotion to duty he raised the efficiency of the Battalion as a fighting unit to a very high level’

Lt Col Nicklin saw active service on Operation Overlord in Normandy, one of the first to land in Normandy on D Day and his leadership led to him being Mentioned in Despatches.

His second operational jump was on Operation Varsity (The Rhine Crossing) on 24 March 1945. Lt Col Nicklin’s chute got caught in trees on landing and he was shot as he hung there. His body was recovered two days later and he was given a field burial conducted by Captain Douglas Candy, Padre with 1st Canadian Parachute Battalion.

Lt Col Nicklin was awarded The Most Excellent Order of the British Empire (OBE) which was announced in The London Gazette on 10 July 1945. His citation can be seen opposite.

Lt Col Nicklin was Killed in Action on 24 March 1945, aged 30 years old and is now buried at Groesbeek Canadian War Cemetery, Near Arnhem.

After the war, the 1st Canadian Parachute Battalion Association created the Jeff Nicklin Memorial Trophy which is awarded by the Canadian Football League to the most outstanding player in the Western Conference. 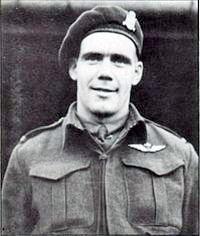