South Africa’s first airborne unit had been established under the command of his CO, Cmdt W.P.”Willie” Louw, along with the other 14 members (see the course photo on Paradata) just 3 years previously.

All of the original British trained members were in the unit when Jeff joined. He jumped with all of them at various times eventually qualifying for silver wings at 50 jumps.

He served for 10 years on active reserve and was discharged on March 31 1974. 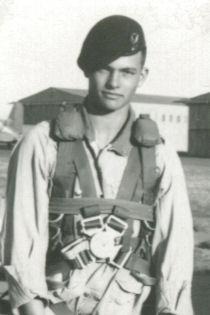