Jeff Robinson qualified as a military parachutist at RAF Upper Heyford and later recalled one of his training jumps:

"I wonder how many trainees actually missed the DZ at Weston on the Green, which happened to me on what I think was my 6th jump? After a good exit at No 2, I found I was not descending at all, just going sideways. After what seemed ages, I eventually started to descend, by which time I had left the DZ behind me and landed in a potato field and was met by a number of land girls!! I had the feeling that they were not concerned about me but were eyeing my 'chute – probably with thoughts of silk knickers!!! Making a sorry end to the story, when I got back to the RV, the NAAFI Wagon had gone – so no cuppa!"

He went on to serve with the 1st Guards Para Bn in Palestine:

"Whilst at Haifa, I took part in the 6th Airborne Div sports meeting, in the Tug of War, which in those days was a major event. As we had always had a lot of banter from the 'little men' of the Paras, so our trainer CSM Davis suggested we give them an exhibition. When the teams were called forward for the final we did everything by drill movements. Can you imagine it:- Team Shun, Team will move to the right in single file, right turn. By the front, Quick march. (on arriving at the rope) Left Wheel – Mark Time –Halt. Team will advance Right Turn. Left Dress. When getting our dressing we slipped the rope over our right foot. On the command Take up the Rope – all right feet came up and we grasped the rope without bending down. The din from the spectators was wonderful to hear!!
After that exhibition – we just HAD to win – which we did with two straight pulls."

Jeff Robinson finished his Army service with the Coldstream Guards.

Compiled with the kind assistance of the Guards Parachute Association 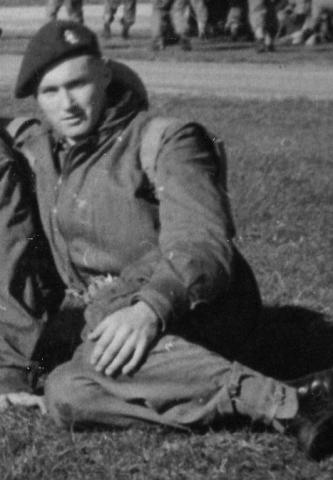