He enlisted into the Army on the 26 March 1942 and after volunteering for Airborne Forces he was posted to the 3 (E) Platoon, 250th Light Composite Company, RASC on the 9 July 1942.

Les got his calling up papers in March 1942, he had to report to Barrhead between Glasgow and Paisley. He was there 6 weeks then got posted to Halifax to a holding company. It was while he was there that he found out that they wanted volunteers for the Airborne division. Les volunteered because it was a shilling a day more to fly gliders and 2 shillings a day more to be a parachutist than the pay he was currently on. Les went down to Amesbury in Wilshire and joined the 250 company. He had a friend there called Charlie Clifford [A], he had volunteered at the same time as Les and Les knew him from when he was a lorry driver in Hull, Charlie was one too and Les even pulled Charlie out of a dyke once down Dunswell Lane. Charlie and Les stuck together from then on, right up until they dropped into Arnhem.

He went with the unit to North Africa in April – August 1943 and then took part in the Italian Campaign (‘Operation Slapstick’), September – November 1943, before returning to the UK in December 1943.

Les started off his time in the army after training going to North Africa, it was the end of the war over there by the time Les got there. The 51st Highland Division of the 8th Army had driven General Rommell out of Tunisia and Les went to see a victory march over there. From North Africa, where Les stayed about 6 or 7 months, Les went to Italy, the reason they were sent to North Africa in the first place was to invade Italy from there. Les remembers a close shave when in Italy; he was going along the quay side and he was being told to get in a boat and he was just about to do so when he was stopped and told to get on the next one. The boat that Les should have got on was blown up in the harbour and it went down. He should have been on that ship. Les saw all sorts in his time in the Army and experienced real hardship to boot.

Les had to do a parachute course at Ringway Airport, jumping out of Whitley bombers through a hole in the floor. He had to do 6 drops out of a Whitley, 2 drops out of a balloon. You had to do 8 drops to get your wings and then your money went up again. It was a tough regime training to be a paratrooper and in any spare time a lot of walking and exercise was involved if you wanted to go anywhere or do anything, such as get to the nearest pub!

He flew to Holland on Sunday the 17 September 1944 and landed on Landing Zone ‘Z’ as part of operation ‘Market-Garden’. He was a member of No 3 Platoon under the command of Captain WVA Gell. The platoon followed the 2nd Parachute Battalion to Arnhem bridge after Captain Gell swapped roles with the commander of 1 Platoon, Captain JL Cranmer-Byng. They defended some buildings to the rear of the 2nd Para Battalion’s positions at the main road bridge for four days until they were overrun and taken prisoner.

Les’ friend Charlie went in an aircraft, they landed at about the same time. It was a huge operation. Les had never seen anything like before it and never has since. They landed circa 8 miles from Arnhem at the Drop Zone and it was carnage with the parachuting of incoming troops spanning for hours. Les ran into Arnhem with his platoon and all hell broke loose when they arrived in the centre - there were bodies and people everywhere and continuous gunfire. Buildings and vehicles were on fire all over the place. Not many troops made it to the centre of Arnhem and Les found himself on a tow path - there was a German barge going along the water firing machine guns at anything that moved, they couldn't fire downwards and Les ended up flopping down next to a cafe near the bridge, he sat next to 2 other men he presumed were his friends. After the barrage of gunfire Les and the two other men stood up, they were both German! They looked at each other and just went off in separate directions! It was complete chaos, Les found an abandoned police station, it had some bunk beds in the back and Les had a sleep for 2 hours, with all hell raging outside! After this Les eventually found about 8 of his outfit and they ended up in the toilet of some council offices.

He ended up in this bathroom for 4 days with nothing to eat and no water and ended up drinking water from the radiators. After this time, with no water, no food and no ammunition the order came through that it was ‘every man for himself’. There were no radios working and ‘runners’ ran in to give the men this information, risking their lives. The group that had started off as 8 had slowly gone down to 3. There was a German sniper in a church tower by the council offices and he had been picking Les’ men off, until they realized where he was and blew the tower up with the last of the ammunition! One of these men, ‘Geordie’ Hall [B], was even shot up the bum when he was climbing some stairs as was seen by the sniper!

By that time everything was burnt out. Les decided the only option was to surrender to the Germans. He and the 2 other men walked down an alley way and gave themselves up. Les dropped his rifle by accident when he jumped a wall, he jumped back over to retrieve the firearm as it had been drummed into them in the army that you never lose your rifle. Once he’d retrieved it, he threw it away purposefully, not just dropping it by mistake! They were taken prisoner and Les never saw any of the 250 company again, until there was a reunion in the 1960’s. Les’ friend, Charlie, managed to escape much earlier, he could swim like a fish as his dad was a swimming instructor at Beverley Road baths in Hull. He managed to swim the river and got away.

Les was sent at one stage to Stalag 12A, then onto IVB and given the POW number 91189. However, in common with a lot of Allied prisoners he was taken out on work parties and ended up in Dresden on a work detail and being billeted in the local police station cells.

“I worked on a Tramway Repair Shop in Dresden, until it was bombed on the 13th/14th February 1945. The Germans then marched them eastwards and Les says it was like a Dads' Army outfit that was in charge of them.  So he and his mate did a runner.  He says they were shouting at him 'Herr Ransom, stop or you'll be shot!' They escaped and stayed with a family in Germany. They then finally managed to get contact with an American truck who gave them 2 big tins of corned beef to be on their way with because the Americans were heading to Berlin and didn't want them on the truck.  Les and his mate returned to the family who had helped them with a tin of the corned beef and then headed to an American airbase to eventually get a Dakota back to Blighty.” [3]

He was liberated by advancing Allied Forces in April and 1945 and returned to England.

The main part of this account came from a booklet produced in 2013. 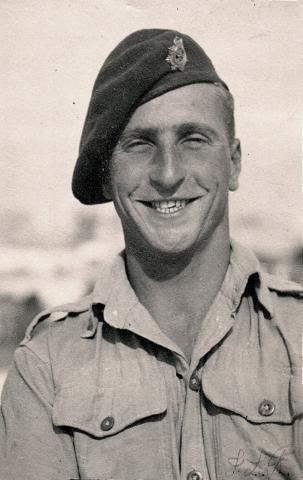