James Walton was born in Liverpool and educated at Salisbury Road Council School and won a scholarship to Balliol Central School.

After his education he joined the army pre war and served with the Liverpool Scottish. In 1942 he volunteered for the Special Air Service and took part in desert raiding operations.

After this he volunteered for service with Airborne Forces and joined the 11th Battalion formed in the Middle East and undertook Parachute Training at Kabrit, Egypt.

Sgt Walton took part in operations in the Dodecanese, parachuting onto the island of Kos during the liberation of that island. Unfortunately he lost his weapon in mid air and landed unarmed. As he made his way from the DZ an armed Italian soldier came running up to him, but embraced Sgt Walton as a liberator rather than an enemy.

Returning to the UK, Sgt Walton was billeted at Melton Mowbray whilst the Battalion waited to be deployed as part of the 1st Airborne Division. That time came with Operation Market Garden and the Battalion jumped on the Second Lift of 18 September 1944.

Sgt Walton managed to make it to the Queen Elizabeth Hospital, although he and his section had to escape through a rear entrance and the back streets back to the Laundry on the Oosterbeek perimeter when German Tanks and infantry occupied the Hospital later that day.

It was for his actions on the perimeter that Sgt Walton was recommended for a Military Medal. However, in a co-operative agreement with the United States, ten British airborne soldiers had their awards substituted for the American Bronze Star.

The citation for this award reads:

“During the action at Arnhem Sgt James Walton was in charge of the Machine Guns on a most important sector of the front.

His guns were constantly under heavy shell and machine gun fire, but for five days and nights he kept them in action. Always when battle was hottest, he was seen to be encouraging his men, bringing them ammunition, or taking over a gun when a man had been hit.

On one occasion he led a party of men under heavy machine gun fire to wipe out a nest of snipers. At all times his cheerfulness and courage was unequalled. Throughout the operation Sgt Walton displayed great personal gallantry and devotion to duty.”

As German forces closed in Sgt Walton made his way to the Rhine, where he placed a wounded man on a boat noting he would get the next one. The reply came that “this was the last boat” and Sgt Walton took the decision, like so many others, to swim the Rhine.

During the confusion of the crossing, Sgt Walton, lost his bearings and upon reaching the bank heard foreign voices and assumed he had swum back to German positions. However, Polish Paratroopers appeared and helped him from the river and to safety.

Sgt Walton served with the 12th and 13th TA Battalions for 20 years after the war and retired as a WO2. 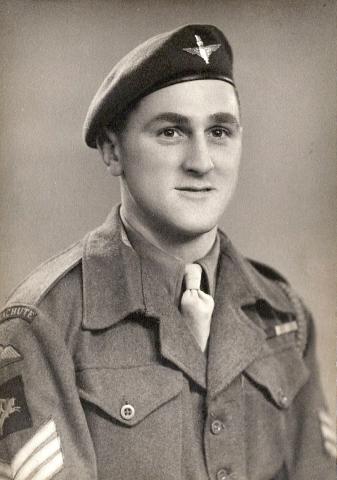