He qualified as a military parachutist on Course 50 which ran at RAF Ringway from 8 to 22 February 1943 and served with No 2 Platoon, 21st Independent Parachute Company (Pathfinders), taking part in the assault to capture the Rhine crossings at Arnhem during Operation Market Garden.

Jimmy was sent as part of a patrol, while occupying houses within the defensive perimeter in Oosterbeek, to contact the 10th Battalion who were thought to be in houses at the top of Annastraat, east of the Schoonord. The patrol moved off across Passberg and along the gardens of houses in Keer Weer and then down a passage leading on to Annastraat. Jimmy took up position with his Bren outside the front door of a house, while the rest searched it. Jimmy was killed by a shot to the head from Germans located across the street in the houses opposite to their location. 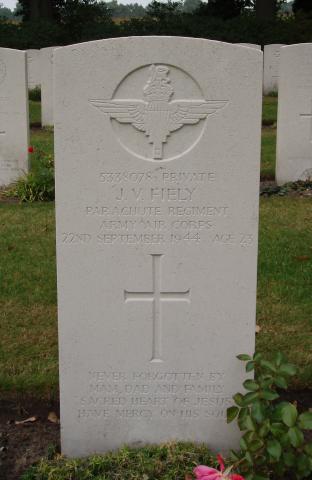