Posted to North Africa 1943 (he is pictured in Book by N Cherry - Red Berets and Red Crosses on page 25 he is listed as Jock Reid.)

The Invasion of Sicily (Operation Husky) he is mentioned in Book by N Cherry - Red Berets and Red Crosses on page 52 and page 60.

He was with the surgical section of the 16th Field Ambulance in Arnhem on 18 September 1944, he was captured and taken POW.  He escaped from Apeldoorn on 5 October 1944, helped by the French resistance he returned to England on 24 October 1944.

James Reid was taken prisoner on the 18 September 1944. The following M.I.9 report describes his escape on the 5 October, and the events leading up to him crossing the Rhine to the Allied lines during Operation Pegasus on the night of the 22/23 October:

I was with the surgical section of the 16th Field Ambulance in Arnhem on 18 Sep 44. Our section was captured by the Germans that day. I remained on duty in the hospital under the Germans and was moved on 24 Sep to Apeldoorn hospital (N.W. Europe, 1:250,000, Sheet 2a and 3a, Z 70).

I was in the habit of dumping rubbish in an incinerator, and the Germans got used to seeing me down there and became careless. On the afternoon of 5 October I hid in a small shelter next to the incinerator, and was able to make my way in the moonlight to a shrubbery and from there over the barbed-wire ditch to the road.

I walked to the outskirts of the town through some gardens and approached a house. I tapped on the window and a man came out. After some hesitation he took me in, and after a great deal of persuasion fetched a member of the underground, who turned out to the owner of the house where Gauntlett (S/P.G.(H) 2781) and L/Cpl Johnson were hiding.

I was with Gauntlett and Johnson until 16 Oct, when I was hidden in another house. On 23 Oct we were taken to the rendezvous in the wood from where the evacuation took place.

Information courtesy of The Pegasus Archive 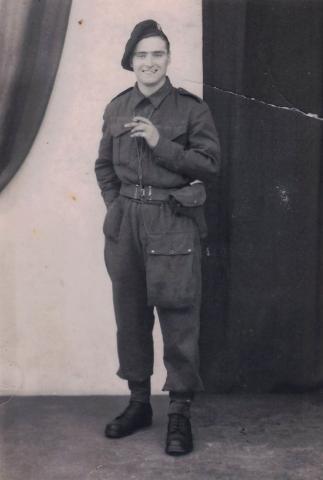