James Ratcliffe worked as a warehouseman before he enlisted into the General Service Corps in Formby, Merseyside in November 1942.

Private Ratcliffe served with The Royal Artillery when he volunteered for airborne forces in April 1944.

Pte Ratcliffe was posted to 12th (Yorkshire) Parachute Battalion and went to Normandy as a battlefield replacement and served in The Ardennes and Rhine Crossing. 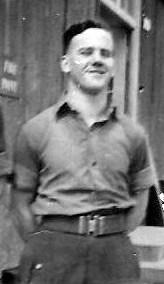