James Chiswell was commissioned into The Parachute Regiment in 1983. He completed various appointments at Regimental duty including rifle company command before attending the Army Staff College in 1995. He served subsequently as the SO2 J3(Operations) at HQ Directorate Special Forces before returning to Regimental duty as a squadron commander. He spent a short spell instructing at the Joint Staff College before moving to be the Military Assistant to DCDS(C), the Director of Operations in the Ministry of Defence.

He took command of 2nd Battalion The Parachute Regiment in 2004 serving with them in Iraq. He was posted subsequently to the Permanent Joint Headquarters as DACOS J3 with responsibility for operational-level oversight of the UK deployments in Iraq, and later in Afghanistan.

He followed this in 2008 with nine months in Washington DC as the Chief of the Defence Staff’s Liaison Officer to the Chairman of the Joint Chiefs of Staff providing military strategic liaison for the current campaigns.

During his career he has served in Northern Ireland, Cyprus, Bosnia, Kosovo, Sierra Leone, South America and Iraq. He was awarded the Military Cross for his actions in the Sierra Leone Operation.

He completed the Higher Command and Staff Course in 2007  taking over command of 16 Air Assault Brigade in December 2008.

He became Commander, Task Force Helmand, in October 2010 when the Brigade deployed to Afghanistan. 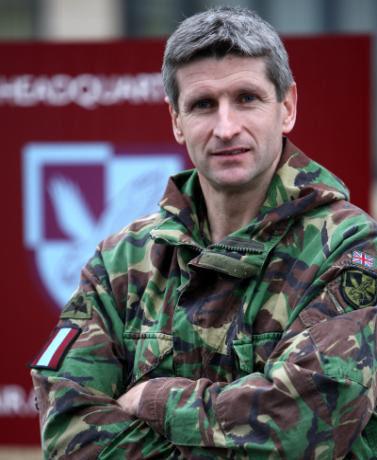