He enlisted at Newcastle-On-Tyne on the 6 October 1928. He was transferred to the Durham Light Infantry (DLI) where he remained until 1935. Private Parker was recalled to active service on the 6 September 1939.

After a brief spell with the British Expeditionary Force (BEF), Pte Parker volunteered for airborne forces in February 1940. After successful completion of his training with No. 2 Commando, Parker prepared with ‘X’ Troop for Operation ‘Colossus’.

The objective of Op ‘Colossus’ was to blow up the Tragino aqueduct. After doing damage to the aqueduct, the men of ‘X’ Troop were captured and taken to Prisoner of War Camp 102 Aquila. When the Italians capitulated in 1943, the camp gates were opened and the prisoners headed for the hills. When the German High Command heard about this, they deployed the Fallschirmjager to round up the prisoners, during this time Trooper James Parker along with many others were recaptured and returned to custody.

Pte Parker was then put on a transport train to Germany on the 3 October 1943. He and R. K. Quinlan then escaped the train on a slow bend. Quinlan broke his legs during the fall and Parker carried him all the way to a farm in Cocullo, where a woman called Agata di Cesare nursed him back to health. On 13 November 1943, Parker and Quinlan made it back to American lines. He was awarded the Military Medal for his actions. 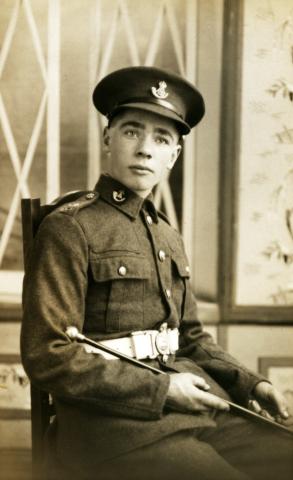