Corporal James McAra Davidson was the son of Euphemia Davidson, and husband of Lilian Kenworthy Davidson, of Rochdale, Lancashire. He originally enlisted prior to 1942 with the Black Watch (Royal Highland Regiment) and later served with 7th (Airborne) Battalion, King's Own Scottish Borderers. He was amongst the troops sent to Norway as part of Op Doomsday to keep order and disarm the German forces in Norway in May 1945.

Corporal Davidson was among eighteen members of 7th Battalion onboard a Short Stirling Mk IV LJ-899 on 10 May 1945. Hampered by bad weather the aircraft crashed enroute to Gardermoen Airfield, near Oslo, following takeoff from RAF Great Dunmow in Essex. Travelling through thick fog and heavy rain, the flight crew were reliant on a Eureka beacon to help them locate the airfield, but with the weather deteriorating the signal could not be located, resulting in the aircraft becoming lost.

In an attempt to locate the airfield, the crew brought the plane down to low altitude in order to identify landmarks in the terrain.  After several attempts to locate the airfield, with the aircraft now perilously low on fuel, the pilot attempted to make an emergency landing just after 0600hrs near to Sweden's Lake Rydafors on the Swedish-Norwegian border. It was during this maneouvre that the Stirling is believed to have hit a tall Pine tree on its approach past the Lake shoreline, breaking the aircraft in two and leaving the aircraft part-submerged, resulting in the drowning of four of the occupants.

The crash survivors made it to Gardemoen on 14 May. After informing the CO of the incident, a mourning party was arranged for the following day. The next morning, the party comprising Major H H Malloy, Major D R Hartt, Reverend (Captain) D M  Nimmo, CSM Morrison and 12 other ranks left Norway for Torsby in Sweden, arriving on 16 May.

The funeral for the four casualties took place at the local church of Torsby, with a funeral parade performed headed by the Local Deputy Sheriff and Cheif Constable and a contingent of the Swedish Army providing a Guard of Honour, followed by the representation from the 7th Battalion. All of the funeral arrangements had been made by the local Swedish Authorities, who had left nothing undone. All shops and offices in the town closed, civic flags flew at half-mast and the streets were lined by local inhabitants. The funeral service was taken by both Reverend Fensby, a local Reverend of the Fryksande Parish and Oscar Lewin, a Roman Catholic priest from Gothenburg. As each coffin was laid in the grave in the churchyard, the Swedish Guard of honour fired a salute. During the laying of wreaths by numerous Swedish organisations Piper Thompson played the Lament 'Lochaber No More' and Drummer Sinclair sounded the 'Last Post' and 'Reville'

Corporal Davidson was among those who drowned in the crash on 10 May 1945, aged 35 years old. He is now buried at at Kvibery Civil Cemetery, near Gothenburg, Sweden where he was later reinterred along with the other three victims of the accident. 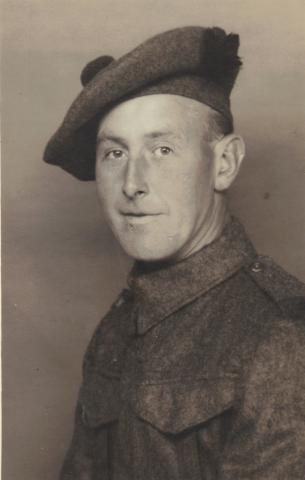