James Macaskill enlisted on 2 November 1944 and after initial training with the Seaforth Highlanders at Elgin, served briefly with the Black Watch at Perth before volunteering to join the Parachute Regiment.

He was posted to Hardwick Hall early in 1945 and then to RAF Ringway for parachute training.

On completion of the parachute course he was posted to a signals training course near Richmond Yorks and then to a Reserve Battalion based in Yorkshire and commanded by the legendary Alistair Pearson.

James was finally posted to the 8th Battalion at Tilshead, serving with them in Palestine from September 1945 until 1948. 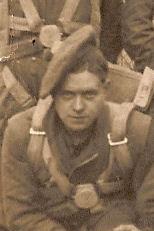