James Graeme Ogilvie, born in Aberdeen, was the son of James and Mary Ogilvie; and husband of Sadie Ogilvie, of Southborough, Tunbridge Wells, Kent.

He was educated at Loretto School, near Edinburgh, from 1931 to 1936. A keen sportsman, he represented the school in Rugby, Boxing and Swimming and also served as a corporal in the school’s Officer Training Corps detachment.

Ogilvie was granted an emergency commission with the Gordon Highlanders on 27 July 1940. He was posted to a training battalion of the Black Watch during the summer of 1940, and then rejoined the Gordons, serving with the 4th Battalion for about a year.

He briefly transferred to the Royal Artillery in November 1941 prior to volunteering for, and transferring to, the Glider Pilot Regiment in September 1942.

Ogilvie was promoted to Temporary Captain, while serving with the GPR, in February 1943.

By September 1944, he was serving as the 2/ic of D Squadron, No 1 Wing GPR. Ogilvie commanded the squadron when it was deployed for Arnhem, during Operation Market Garden, as Major Lyne the squadron commander was unfit for combat following injuries sustained at Normandy.

Captain Ogilvie took off from RAF Keevil with squadron headquarters on the first lift at 10:16 am on 17 September. The pilots of D Squadron were allocated to the defence of 1st Airborne Division’s Headquarters at the Hartenstein Hotel. Ogilvie attracted some attention from photographers as he wore a kilt and was photographed on Monday 18 September with Lt Col Iain Murray.

A few days later the Main Dressing Station at the Schoonord Hotel on the Oosterbeek crossroads, close to the 1st Airborne Division HQ, was overrun by SS troops on the morning of 20 September. Maj Gen Urquhart, commander of 1st Airborne Division, ordered a patrol to investigate.

Wounded in the shoulder, Ogilvie appears to have moved to a house a few doors away from the junction of Stationsweg and Utrechtseweg in Oosterbeek but maintained command of the D Squadron pilots.

In spite of his wound he continued to play an active role in maintaining the defensive perimeter at Oosterbeek and assisted in the co-ordination of GPR pilots for the withdrawal of the remnants of the 1st Airborne Division on the night of 25/26 September.

He was last seen alive dressed only in his kilt with a Sten Gun round his neck attempting to swim across the Rhine to the safety of Allied lines. His body was later recovered from the river bank by members of the Dutch Resistance. 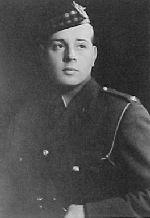