James Gerard Cassidy M B, son of James and Ellen Cassidy, of Rathfriland, Co. Down, Northern Ireland, was commissioned into The Royal Army Medical Corps on 19 December 1939.

Captain Cassidy volunteered for airborne forces and qualified as a military parachutist on course 26 which ran at RAF Ringway in September 1942 and was posted to 16 Parachute Field Ambulance RAMC.

He then went to North Africa on Operation Torch, as the Medical Officer attached to Headquarter Company, 1st Parachute Brigade.

Capt Cassidy was killed whilst treating a wounded soldier at Tamera on 10 March 1943 aged 28 years. Initally given a field burial, he was finally laid to rest at Tabarka Ras Rajel War Cemetery, Tunisia on 10 March 1944.

In September 1943 The London Gazette published that Capt Cassidy had been Mentioned in Despatches for Operation Torch. 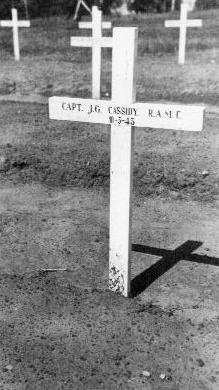